Cool Down With These Orlando Steakhouse Drink Lists

Whether it’s with a dip in a pool, a fresh platter of seafood or a water ride at Disney World, summer in Orlando is all about keeping cool. One of the best ways to do so is with a quenching beverage at any of the city’s best steakhouses. From chilled white wines to tropical cocktails, there’s plenty of ways to beat the heat. Here are some of Orlando’s best steakhouse drink menus.

Christner’s Prime Steak & Lobster: At this classic-looking, supper club-style haunt, it’s all about the wine. With one of the most popular and rightfully acclaimed wine lists in the city, Christner’s has lots to offer for oenophiles or people just looking to cool down with a glass of bubbly or white. One of the coolest aspects of the restaurant is its wine lockers, rentable for guests. Christner’s allows customers (particularly good for regulars) to rent their own temperature-controlled locker on-site, where they’ll keep and age wine for whenever they come in to dine and want to drink it. It’s a flat annual rate, with no corkage fee. Altogether, the restaurant boasts more than 4,500 bottles to choose from, with particularly summery options like South Africa’s Longridge Blanc, Sonoma’s Chalk Hill Chardonnay, an abundance of Champagne and lots more.

Capa: One of the sexiest and most popular steakhouses in town is Capa, a Spanish-inspired restaurant on the 17th floor rooftop of the Four Seasons Orlando. Up here, the drink list is rich with choices for both cocktails and wine, all with a Spanish-accented twist. Try the house Capa Gin & Tonic, a crisp and refreshing gin tipple splashed with Fever Tree Mediterranean tonic, apple, key lime and botanicals. They’ve also got a couple kinds of fruity sangrias, like a white version with lemongrass, white wine, lavender, tropical fruit and chamomile tea, and a red with berries, ginger, cinnamon and chai. Even Capa’s non-alcoholic mocktails are alluring. The Spa Day features cucumber, mint, lime and soda, while the Capa Limonada features lemon, raspberry, cinnamon, rosemary and soda.

Kres Chophouse: The general theme of this ornate steakhouse is classic-meets-contemporary. Here, the menus take old-school ideas and make them modern, a sentiment that applies especially to its signature cocktail selections. For instance, an Old Fashioned gets sweetened up with oloroso sherry and apple, while a brandy sour gets enriched with butter brandy, Cointreau, egg white and violet. Be sure and try the New York Sour too, the rare instance of Malbec being refreshing, as it’s blended with bourbon, simple syrup and lemon for a puckering cocktail.

STK: In every city where STK has a location, the sexy, sultry steakhouse adapts itself to its locale with a range of signature dishes and drinks designed specifically for that market. In Orlando, that means drinks like Orlando Pride, a fruity and frothy medley of Bulldog gin, fresh lemon juice, muddled raspberries and egg whites. And the Apple Bottom, a riff on sangria that features rum, cider, cinnamon, fruit and choice of red or white wine. STK also features a solid roster of bubbly, like Stellina Di Notte Prosecco and Chandon Rosé, plus several white wines by the glass from all over the globe.

Bull & Bear: In addition to its impressive wine list, which includes a lengthy by-the-glass selection of sparkling wines, whites, rosé and even half bottles, this sleek steakhouse inside the Waldorf Astoria really raises the bar on classic cocktails. From Negronis to Sazeracs, each one is unabashedly boozy, bracing and impossibly well-balanced. The Bull Sazerac is a particularly good example, with Bulleit rye, absinthe, bitters and in a novel twist, a splash of rhum. For something a bit lighter and more floral, opt for the French Garden, which has vodka, Absentroux, Falernum, housemade grenadine and a dash of orange water. 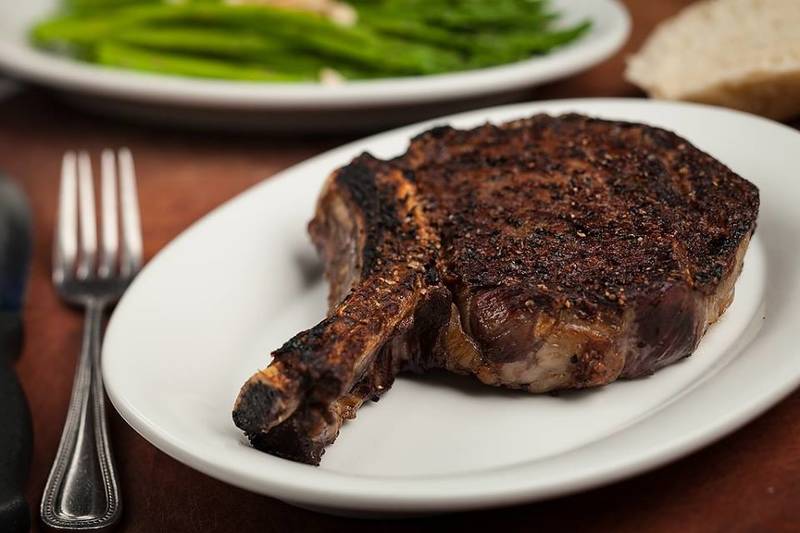 Seven Reasons to Feast on Steak in Orlando
Not Now     x