Get a Taste of Texas at These Top Austin Steakhouses

Deep in the heart of Texas cattle country, Austin is undoubtedly one of the best cities for steaks in the U.S. Sure enough, the city is filled with impeccable and unique steakhouses, each one putting a special Texan stamp on the meaty tradition. Here are some of the best (and most Texan) steakhouses in Austin:

Vince Young Steakhouse: This downtown classic features a variety of top-tier USDA Prime steaks, from rib-eye to porterhouses for two, but what really sets this steakhouse apart is what else is on the menu, accenting the beef. There’s crispy deep-fried Texas quail with bacon-infused tangerine marmalade. There’s seared foie gras with jalapeño cornbread and smoked maple syrup. There’s short rib chili. There’s a hulking tomahawk pork chop with grilled peach-honey glaze. And there’s pan-roasted chicken with shrimp sauce. All of this is just a taste of the ingenuity and Texas twang happening at Vince Young.

III Forks Prime Steakhouse: When visiting the Austin outpost of this Texas-based group of steakhouses, mosey down the menu to the “local favorites” section to check in on what’s unique to this particular Texas city. Turns out that means prime double-cut pork chop with serrano-peach BBQ sauce, braised short ribs with ancho bordelaise, rack of lamb with persillade crust and roasted chicken with red pepper sauce. Austin’s got it good.

Lonesome Dove Western Bistro: Another Texas favorite, Lonesome Dove has flown into town with an Austin outpost offering its signature blend of steaks and uncommon Texas-y accompaniments. The menu maximizes local ingredients indicative of Texas cuisine, like rattlesnakes, ensuring that the menu is distinct and true to its state. This means wild game spit-roasted over mesquite, sausage made with rabbit and rattlesnake, elk with black garlic, wild boar chorizo and lots more.

Truluck’s: Every city has its iconic steakhouses. In Austin, Truluck’s is one of them. And rightfully so, thanks to its tasteful blend of seafood, steaks, chops and richly local accompaniments. Start with meatballs made from a blend of prime chuck, brisket and short rib, or braised boneless short ribs with bordelaise. For entrees, the redfish Pontchartrain is an homage to Louisiana next door, smothered with crawfish, shrimp and blue crab. Or go spicier with the dynamite filet, a 7-oz. cut topped with crab, rock shrimp and sriracha cream sauce. The sides are noteworthy too, like crab fried rice and miso Chinese broccoli.

Bob’s Steak & Chop House: It may look like an old-school steakhouse, but Bob’s has a few tricks of its own up its chef sleeve. Housemade applesauce is a nice addition to pork rib chops, while a pungent green peppercorn sauce enlivens a roasted duck dish. Steaks come with a nice assortment of sauteed onions and peppercorn gravy, and broiled jumbo shrimp scampi gets mixed into black pepper pasta. 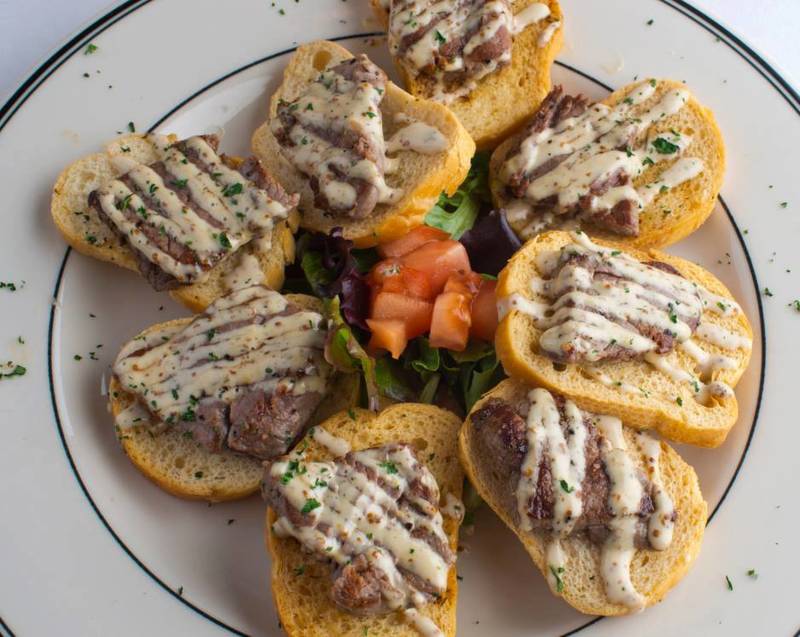