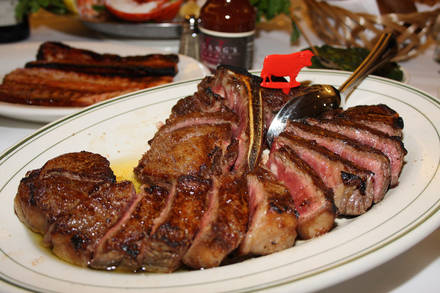 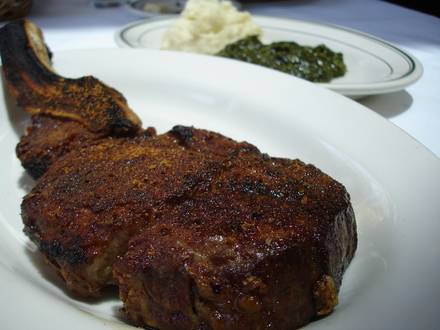 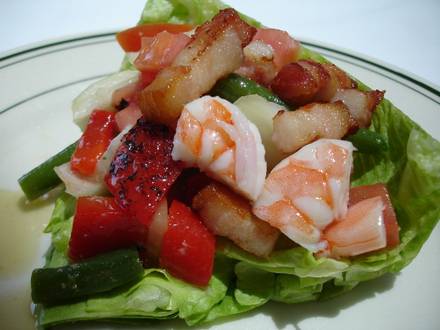 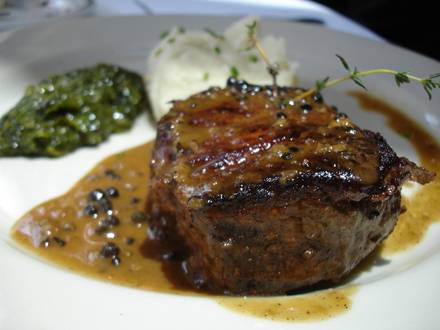 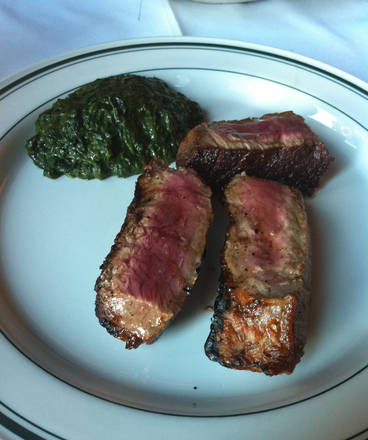 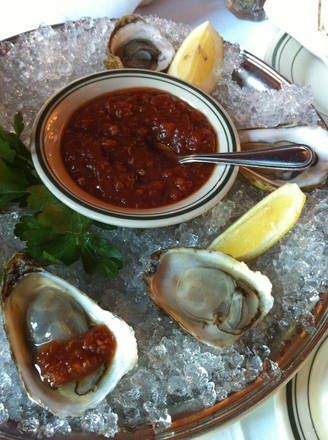 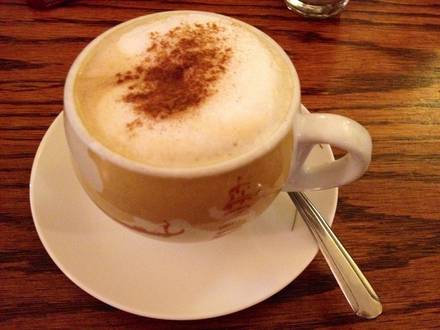 From the acclaimed Peter Luger Steakhouse in Brooklyn to swank Midtown East, Wolfgang Zweiner has spread the gospel of good steak throughout the U.S., moving even beyond New York to places like California, Florida and Tokyo. But it all began in New York, and it’s no surprise the greatest city in the world has one of the best steakhouses in the world.

Though acclaimed as the surest spot to find New York City’s very finest steak, prime and aged, Wolfgang’s Steakhouse (as is the case with most fine dining steak restaurants) serves some very excellent fish. From the grill at Wolfgang’s Steakhouse comes Chilean sea bass, salmon and yellow fin tuna, as well as a very large lobster that you can have broiled or steamed.

Wolfgang’s Steakhouse pays a little more attention to the greens than might be expected at a place known for steak; at lunch time, you can enjoy Nicoise and chicken paillard salads, as well as, of course, a steak salad. Also at lunch time you can have the classic hamburger or a Wolfgang’s steak sandwich. Steak is, no doubt, the main reason most of us go to Wolfgang’s Steakhouse, which has carved out a place for itself in a city full of steakhouses, serving the prime red meat in way that are sure to draw ooohs and ahhhs from diners.

Still, comparisons with Peter Luger Steakhouse are inevitable, as The Daily Meal notes, Wolfgang’s Steakhouse steak is “a very faithful recreation of the one served at its progenitor. USDA Prime, dry-aged in-house, and cooked under a ripping-hot broiler, it’s served thick-sliced, sizzling, and perfectly-cooked. Other steaks include New York strip, ribeye, and filet mignon; the menu is small and focused (but still larger than Luger’s).” And the dining room at Wolfgang’s Steakhouse is much more luxe, though not overstated: low lights, white tablecloths, and walls with very little decoration, so not as to distract from your intimate interaction with some of the finest meat you will have in New York City or anywhere else in the world.

Me and my husband was celebrating our wedding anniversary. Everyone was very friendly and welcoming. Food,dessert and drinks was excellent . Thank you to Everyone at Wolfgang Steakhouse. We arrived and were seated immediately. The server arrived as we were sitting down. We ordered the jumbo shrimp cocktail- we got four large shrimp for $30...

From Beginning to End the dining experience at Wolfgang’s was outstanding . Started with an Espresso martini paired with freshly cut non greasy potato chips . Both were delicious. The perfectly laid out bar makes for great place to have a pre dinner drink or eat . Though I’ve eaten here before I had not had the pleasure of dining inside . I had no idea how vast the restaurant was inside . Simple class and cleanliness with a comfortable warmth is the best way to describe the back room . The tables are far enough away from each other that there is no noise interference from other patron conversations . We loved this rare feature not found very often in Manhattan . Exceptional service and a magnificent meal ensured we will be back soon .

Last night I went to dinner with my friend at Wolfgang's and I ordered a filet mignon and I asked for it medium rare. When it came out it was way overcooked. The manager came over ready for a fight. He said the steak was perfect, took my knife and sliced it open. He proceeded to say: "if you had a bad day don't take it out on the chef. We have 30 restaurants and know how to cook steak." It was as if he wanted a fight. My friend told him to let it go, but he would not stop. Finally with waiters and other tables looking on in amazement he grabbed the plate and stormed off. I must say that my friend had a sirloin that was perfect. I have never seen a restaurant manager scream at a customer like this. They did take the steak off the check, but the only apology came from the waiter about how the manager acted. This was not my first time at the restaurant, but definitely my last. For an upscale restaurant the managers attitude was totally unacceptable and uncalled for.

My fillet was not even close to being a center cut. It was tough and they grossly overcooked it. Always wanted to try this place and it was a huge letdown. Will never go back. Others got 2 different types of steak and both were tough and 1 was overcooked and 1 was undercooked? On a bright note the oysters were excellent. Head south for a good steak

This place is very cosy. The staff are welcoming. I love the tuna steak here.. Full value for money. 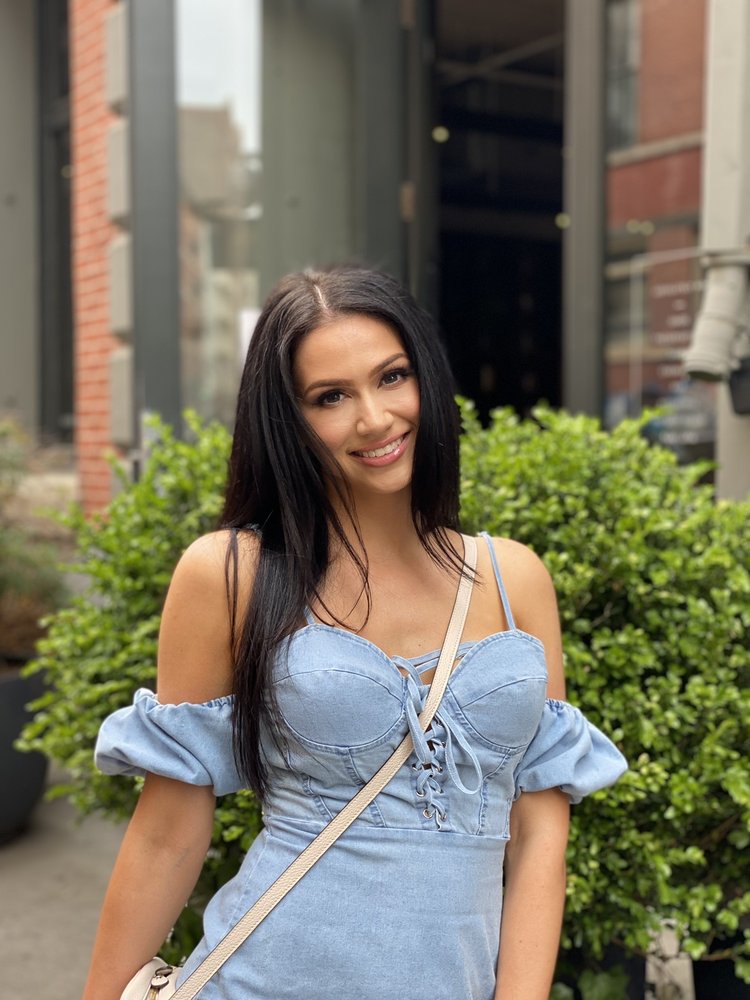 The bacon alone won this review 5 stars. Wow, I mean the piece was so damn huge its was almost a pork chop. It was nice and hot and just mouthwateringly... 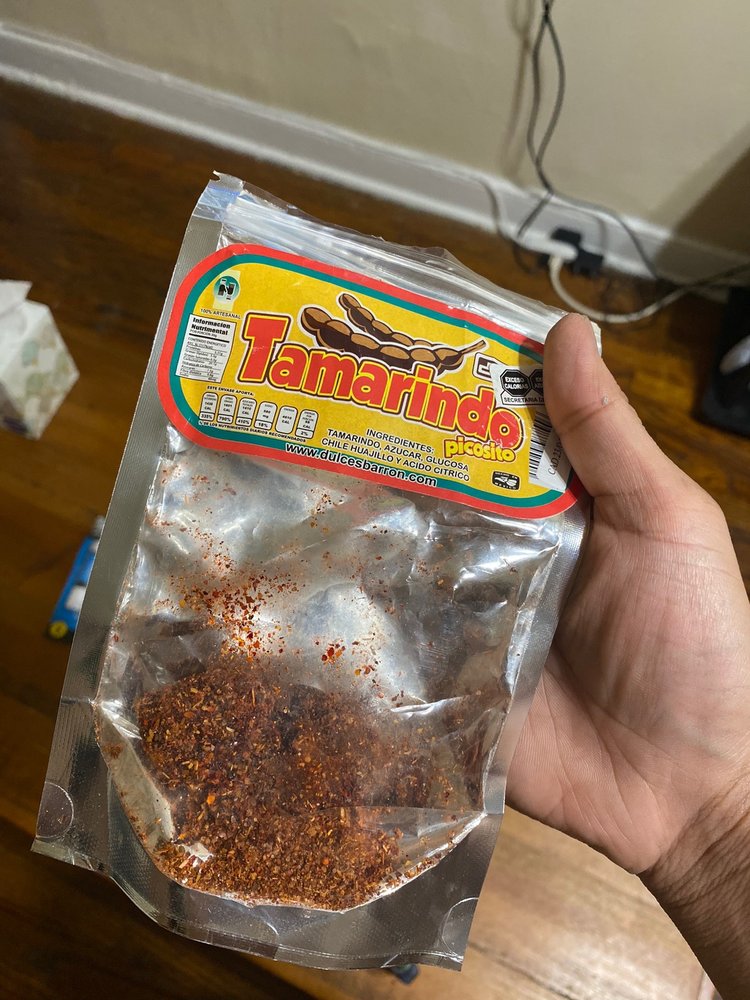 Waste of money. This location makes money off of the reputation of the other locations. 1. Table was very wobbly 2. My guest got elbowed by the waiter...

Waste of money. This location makes money off of the reputation of the other locations. 1. Table was very wobbly 2. My guest got elbowed by the waiter (wasn’t acknowledge until we made subtle comments) 3. Medium rare was actually cooked as rare 4. “German Potatoes ” were heavily over-seasoned - average diners have way better potatoes 5. Steak sauce was heavily salted 6. Utensils were dirty

Probably my first visit here was when I was 3 or 4. As I grew up, I’ve been here very often, and as you know, very good taste and service with reasonable price. I love here. 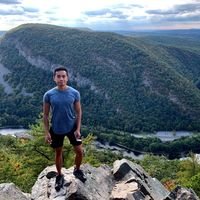 Wolfgang's is still my favorite steakhouse in NYC after I have tried a few in the past 2 years, and this 54th Street venue is where I tried it first - and... 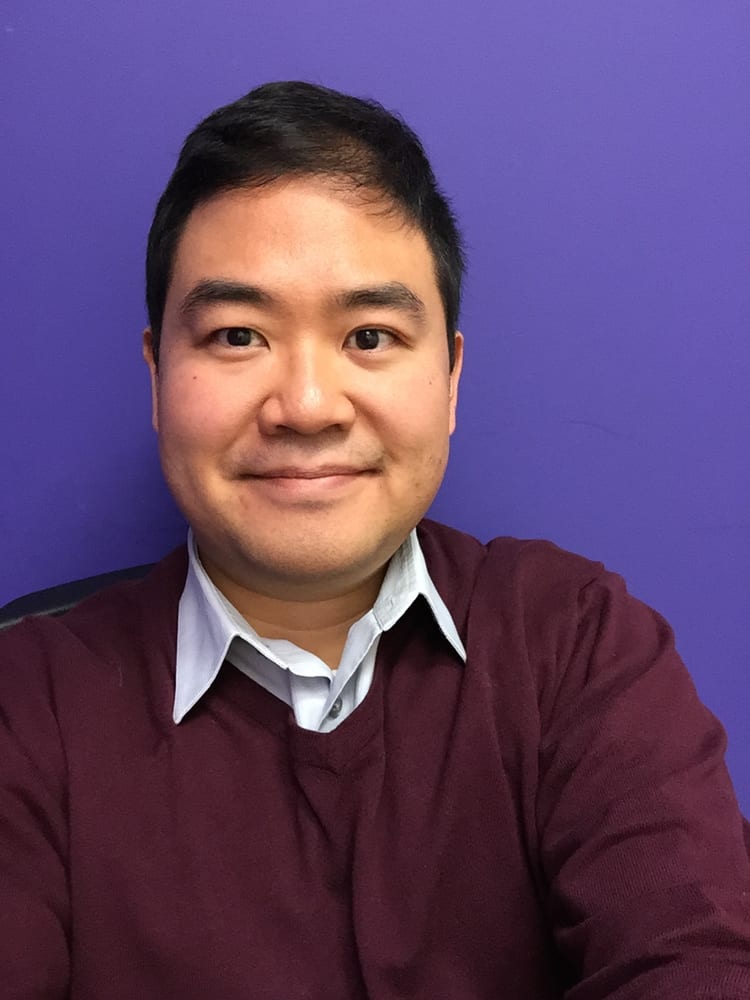 A somewhat disappointing experience. Pros: good wine selection and cocktails were solid. Bacon appetizer is what you'd expect at a good steakhouse....

Delicious steaks and lamb chops. Fabulous welcoming hostess. Servers and staff listen and orders come out for diners special needs. Atmosphere is perfect for a steakhouse.