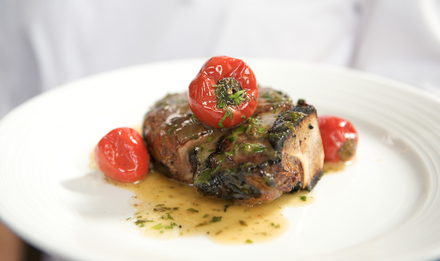 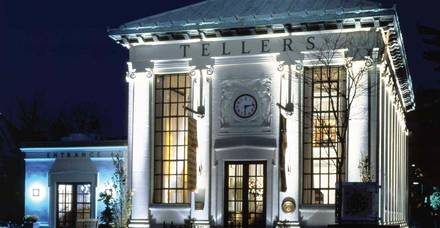 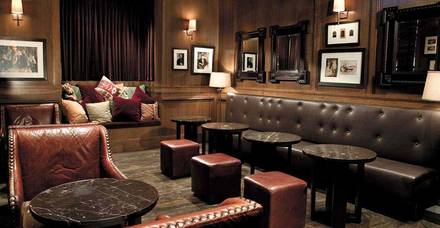 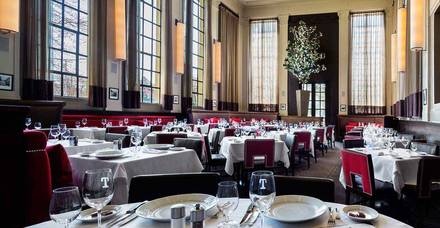 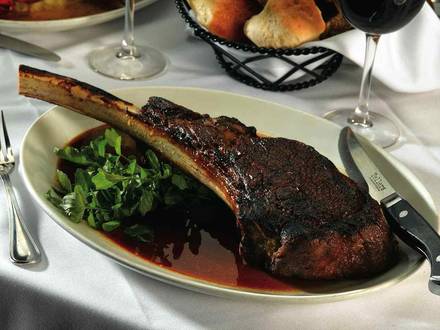 Oysters, Dover sole, branzino and other steak house favorites kick off the Teller’s, An American Chophouse menu, though the eyes are immediately drawn the lower center of the menu where the fabulous meats are listed, divided into Classic Tellers and USDA Prime 21 Day Aged: the former includes three different portions of filet and a skirt steak with a miso marinade; the latter includes boneless New York strip, a porterhouse for two, and the signature ribeye.

You can also get the wedge salad, creamed spinach, fried onion rings, all the predictable standard steakhouse menu items, but all done so well you’d think these readily recognizable foods were invented at Teller’s, An American Chophouse.

After gushing about the beautiful interiors at Teller’s, An American Chophouse, “Gayot” reports that you should “Try a plate of Tellers’ signature and addicting duck fat fries to share, or opt for the jumbo lump crab cakes with aioli as a starter. The boneless New York strip and filet mignon are among the restaurant's signature beef choices, but seafood lovers will also find steamed Maine lobsters, branzino with lemon-caper brown butter, and local flounder with a panko crust. Complement your meal with a selection from the extensive wine list. Big band music completes the experience. Save room for dessert, where you’ll find a fudge layer cake, Nutella cheesecake, and lighter options like sorbet. A gluten-free menu is also available. Cigars can be found in the Gold Bar.”

Throughout the week, there are special events at Teller’s, An American Steakhouse. On Sunday’s fixed price menu there’s a good selection of the restaurant’s greatest hits, including Teller’s Delmonico and Filet Mignon Wellington, this last a classic preparation the nestles positions the meat inside a puff pastry (the kind of meat dish you would probably never make at home). On Wednesday night there’s a wine dinner that features three courses, including dessert, paired with wine, for a very reasonable price.