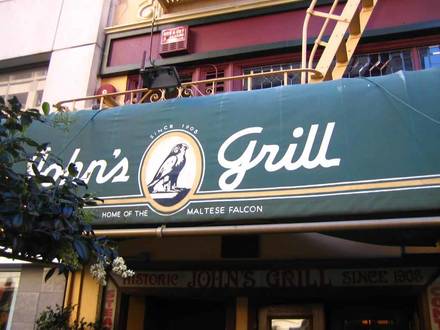 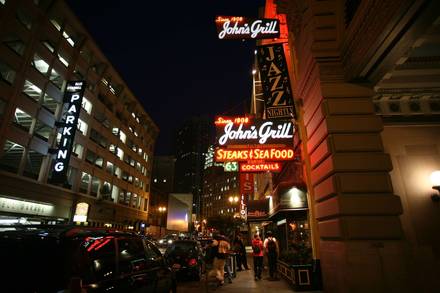 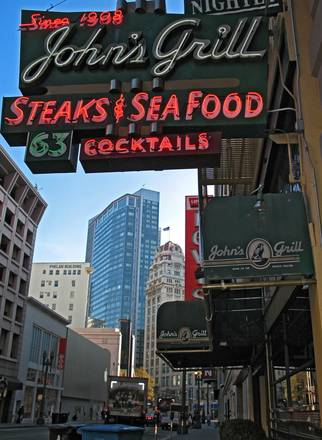 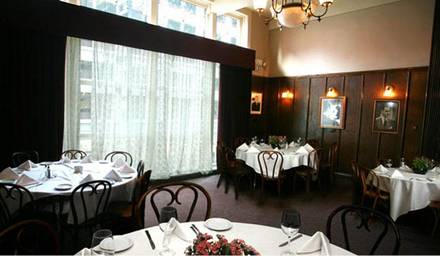 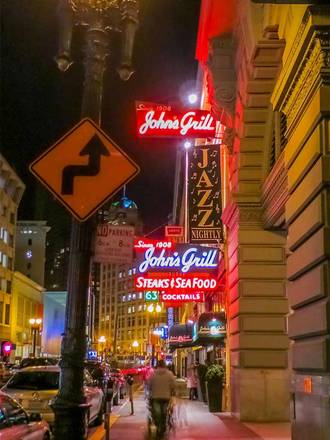 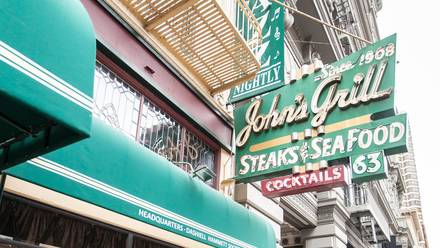 It's no exaggeration to state that John's Grill is best known for attracting a healthy dose of celebrities and other A Listers. All you have to do is look at the photos on the wall of San Francisco's most popular steakhouse to see who's been here. From Alfred Hitchcock and Telly Savalas to Hillary Clinton and President Gerald Ford, the list is astounding.

The high-profile institution has even been rated highly by food media, including Esquire, Gourmet and Zagat. It's conveniently located in the heart of the city, close to the downtown theaters, Moscone Convention Center, major hotels and Union Square. John's Grill's interior is what you'd expect of an icon: original period furnishings and dark, oak-paneled walls.

The menu is all American steakhouse. Expect such favorites and classic dishes such as jumbo prawn cocktail, USDA prime steaks and a host of seafood options. A bit of trivia is that the restaurant was mentioned prominently in the Maltese Falcon novel.

FATHER’S DAY IN SAN FRANCISCO IS ALL ABOUT OUTSTANDING STEAK

Wow!!! Will not disappoint! Service is abundant, food choices are vast. 3 of us went ordered 3 different things.all were delicious!! A little on pricey side .but we'll worth it!!

The prices were pretty high, but not outrageous. The service was good. The food was good. I would say they are both just shy of great. Personally, I wouldn't go out of my way to eat at John's Grill, especially being a tourist. But if you happen to be in the area looking for something above average to eat, it is a pretty good option.

The food was amazing I wish I had a picture but I ate it so quickly! A bit pricey but well worth it New York Steak was so tender just melted in your mouth. The service was awesome we got in ten minutes before close, a group of five still seated us and served us a perfect meal.

This great San Francisco restaurant has long been a favorite of mine. Steaks, fish, pasta, and an incredible burger. The French fries are the best I've ever had. It's pricey, but what isn't in the city? Worth every penny. Service here is some of the best in SF. The best seat in the house is a cozy booth in the bar. Pro Tip: Go early if you don't have a reservation. THIS SMALL RESTAURANT IS ALWAYS BUSY!

The food was OUTSTANDING!! The service was more than one can ask for. You're not going to believe the character and history the restaurant has given it's age. A true historic site and a complete must have. Cozy, comfortable stetting with a noise level that's enjoyable. Not to mention a Parking garage directly across the street, which may not mean much to most but when it comes to the city of SF!! It's a gem and more than you can ask for!! Thank you JOHN'S Grill for an amazing thrill.❤️

Was there for a party dinner. I had a steak, was a little overcooked but had great flavor. The steak was a great cut and had just enough fat to make it tender. The service was great, the servers were extremely attentive and made sure that everyone's glasses remained full. I definitely recommend, 4 stars because of the steak being overcooked and the sides didn't wow me, but overall if you want a flavorful steak and great table service John's is the place.

Home of the Maltese Falcon.. We stumbled onto this place after getting off the trolley. Awesome choices for Seafood and steak. Wait staff was patient and attentive and helped me with my diet restrictions. We had a lovely time and a wonderful meal. Will definitely come back again.

I came to John’s because it is listed (on one list, at least) as one of the best steakhouses in SF. That’s definitely more historical than current, and perhaps its history deserves a place on such a list. But not based on quality. The food quality and service do not merit being included as one of the top places in San Francisco. My steak was properly cooked on the interior but charred (not crust, but black char) on the outside, and the burrata salad was nearly inedible with bitter cheese and unripe tomatoes.

AMAZING!!! We didn't have a reservation but we're able to get seats at the bar for dinner. The service was great and the food was excellent! Not only was the food delicious but was really good value compared to other steakhouses. Would definitely come back and would highly recommend!

Classic Steakhouse that beats the big names. Do yourself a favor and check this place out. Steak cooked absolutely perfect medium. Big baked potato and crunchy broccolini on the side. And some of the best bread (sourdough of course) I’ve had in a restaurant. Was looking for a business meal for 5 alternative to the big name places and stumbled on John’s. I’d say about 25% less pp. and better than the last Morton’s experience I had in San Diego. Old school local place charm. Recommend.

I'm certainly glad I was able to experience this historic restaurant, the home of the "Maltese Falcon". Reminded me of another old school eatery, Musso and Frank's Grill in Hollywood. John's has a 100+ year history hosting celebs with photos on the walls to prove it. Great location and walking distance from Hotel Fusion where my sister and I spent several days as tourists. John's is known for steaks but I chose the Halibut which was great, sauce very pleasing. Sunday evening the place was packed. Folks kept coming in and were directed upstairs to two additional floors of dining space. We felt like we were part of a "happening".

Wow what an interesting experience, from the building too the menu. From the guest to the staff, grate place to people watch. Dinner was delicious. And if you're over 50 "Jack LaLane" and the Maltese Falcon will bring back memories..

Nice place, tons of history. Close to the westin hotel union square, like 5 min walk. Food was good, service was excellent. Priced very well for the meal. I will go back, I didn't give five stars because my tortellini tasted like seafood. We ate on the second floor, there is lots of history to read on the walls. Nice place

Great steak place. A little pricey but since we were celebrating we had a terrific time. It's best to make a reservation especially on the weekends.

Three of us ordered the NY strip medium rare. All 3 came cooked drastically differently. 2 were sent back and the new ones were equally as bad! Famous for steaks which they can't cook properly it seems. The atmosphere, drinks and staff were excellent so perhaps an off night with the chefs.