The Most Outstanding Steakhouse Appetizers in Dallas

When it comes to steakhouse appetizers, commonplace starters like wedge salads and lobster bisque are all well and good, but it takes a special place to really stand out by going the extra mile. In Dallas, there are several such special places, who realize the importance of a first impression and how an outside-the-box appetizer can set the pace for a memorable meal. Here are some of Dallas’ best steakhouses, serving up some of the city’s best appetizers.

Chamberlain’s Steak and Chop House: In addition to popular fixtures like shrimp cocktail and jumbo lump crab cakes, this old-school gem embraces the contemporary with creations like truffle cauliflower soup with crispy kale and pecorino romano, or bison and prime beef meatballs with Texas whiskey-peppercorn sauce. The Texas Kobe beef potstickers with sesame-soy glaze are an eclectic addition as well, while deviled eggs come decked out with lobster, caramelized bacon and chive cream.

Dallas Chophouse: This modern, stylish downtown steakhouse exceeds expectations at every turn, starting with the seasonally inspired starter plates that serve to raise the bar (and expectations) for a dinner to come. The fried artichokes are a popular option, enhanced with Parmesan, oregano, sriracha mayo and lemon aïoli, and the roasted bone marrow comes topped with roasted marrow mousse with a zesty lemon-parsley caper salad. For something a bit lighter, opt for the heirloom beet salad, featuring three colors of beets, plus black truffle honey, goat cheese and garden herbs.

Kirby’s Steakhouse: Dallas’ beloved steakhouse institution certainly has a knack for playful innovation. This is most evident in its appetizer selections, which run the gamut from fried asparagus with lump crab and bearnaise to grilled tequila shrimp, potato-crusted calamari, and “lobster cargot,” which is basically escargots but with buttery lobster instead of snails. Another fun one is the oysters Ladybird, which riff on baked oysters Rockefeller by pan-frying the oysters and serving them with saffron-braised leeks and bearnaise.

SĒR: As the name of this steakhouse probably suggests, nothing about this place is par for the course. Rather, the only thing that’s expected is a steady stream of novel dishes and surprises. Like venison carpaccio with carrot “BBQ” and pecan, beef tartare deviled eggs with smoked trout roe and seasonal fish crudo with enoki, barrel-aged soy, pepper mash, whey dashi and pickled lime. Even familiar-sounding appetizer plates, like crab cakes and shrimp, take unusual turns. The former features country ham, green tomato relish, malted aïoli and buckwheat salad, while shrimp comes with michelada cocktail sauce and dandelion chimichurri.

The Hall at Trinity Groves: Swing by this casual, beefy hall after 3:00 p.m., when the dinner menu kicks in and appetizers like roasted green chili hummus take the plate. One of the main highlights is the savory Creole strudel, a medley of spiced seafood and andouille sausage with remoulade sauce. 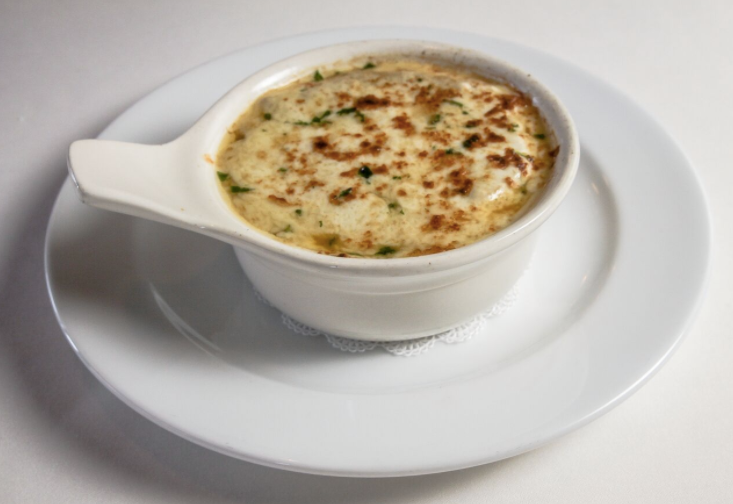 Best Steakhouse Soups in Dallas and Fort Worth
Not Now     x