See other cities in Tennessee

Nashville, geographically speaking, may very well be the perfect city for exploratory dining. Located in between the Midwest and the South, it’s a city that takes a “best of both worlds” approach to cooking, incorporating plenty of ingredients, techniques and traditions from both areas of the country. Nashville’s steakhouses are apt examples of the city’s culinary dexterity, featuring menus that go well beyond the call of meaty duty with dishes that are wholly unique to the Music City. From Nashville hot oysters to mac & cheese with country ham gravy, these are some of the best steakhouses (and plates) for a truly one-of-a-kind Nashville dining experience.

Jeff Ruby’s Steakhouse: With locations scattered throughout the area, Jeff Ruby’s has proven to be one of the most endlessly fascinating, creative dining destinations in Nashville and beyond. The restaurant has a knack for local cooking, adapting its kitchens and menus to fit with each particular outpost. In Nashville, that means the menu starts with items like sherry-splashed crab bisque, fried green tomatoes with Burrata and Nashville hot oysters, which replace the typical chicken with fried Chesapeake oysters, candied hot sauce and pickled spring onion relish.

Union Common: Traditional raclette cheese isn’t something you see too often at many steakhouses, but here at Union Common, it’s indicative of a restaurant that’s anything but “common.” The cheese adds a bit of pomp and circumstance with its showy preparation, as a large wheel of cheese is warmed over a fire and scraped off onto plates, potatoes, apples and bread. In this case, the cheese is heaped over toasted walnuts, baguette and apples, and it’s a show-stopping start to a meal filled with memory-makers like beer-battered crab cakes, escargots, wild boar sausage, port-braised short ribs with potatoes aligot, New Orleans BBQ shrimp, Gulf snapper with rutabega puree and cheesecake beignets with graham cracker, grilled pineapple and caramel.

Jimmy Kelly’s Steakhouse: One of the oldest restaurants in Nashville, Jimmy Kelly’s is a steakhouse located in a historic Southern mansion, with a menu befitting the Southern charm and lore. Unlike anything else in town, a meal at this institution is filled with original dishes and timeworn recipes, many of which dabble in Southern pastimes. Like the BBQ prawns stuffed with basil and wrapped in smoked bacon. Or the mussels pan-roasted in Chardonnay. Or the fried Gulf oysters with horseradish cream sauce. Or the rib-eye cooked in a black iron skillet with Creole spices and chipotle hollandaise sauce. You get the picture.

Kayne Prime: On the opposite end of the spectrum from vintage Jimmy Kelly’s, Kayne Prime is as modern and progressive as they come. The slick, eclectic eatery fuses steakhouse traditions with ideologies and inspirations from across the globe, resulting in one of the most singular dining experiences in Nashville. Start with appetizer plates like duck confit tacos and popcorn buttered lobster with popcorn beurre monte, then move on to farro salad with pistachios, apples and sorghum vinaigrette and any of the steaks, most of which hail from either Alabama or Texas. Option steak sauces and accompaniments include truffle bearnaise, salsa verde, foie gras and bone marrow butter, while other entree options include chicken with smoked hazelnut gremolata and pork porterhouse with tandoori spices and root beer gastrique.

The Southern: True to its name, The Southern is the quintessential dining experience for steakhouses in Nashville with Southern flare. Skewing modern and inventive, dishes like lamb with lemon grits and tomato-fennel jam, chicken fried chicken with white cheddar mac & cheese and country ham gravy, and fish and grits with sweet potato grits and spicy tasso vinaigrette are a few apt examples. And those are just the appetizers. Delve deeper with Southern-inflected options like smoked pork chops with spiced blueberry compote and collard greens, braised beef brisket with jalapeño-cheddar grits and cilantro pesto, and burgers topped with pimento cheese, crispy fried onions and jalapeño bacon.

Ruth’s Chris Steak House: Time and time again, at locations throughout the country, Ruth’s Chris proves itself to be one of the most dexterous and endlessly creative brands in the business. At every location, the restaurant manages to prepare individualistic dishes that are totally original to the area. In this case, the Nashville outpost features Southern-infused fare like barbecued shrimp with white wine, butter and garlic, cold-water lobster tail with Cajun spices and mushrooms stuffed with crab meat and romano cheese. 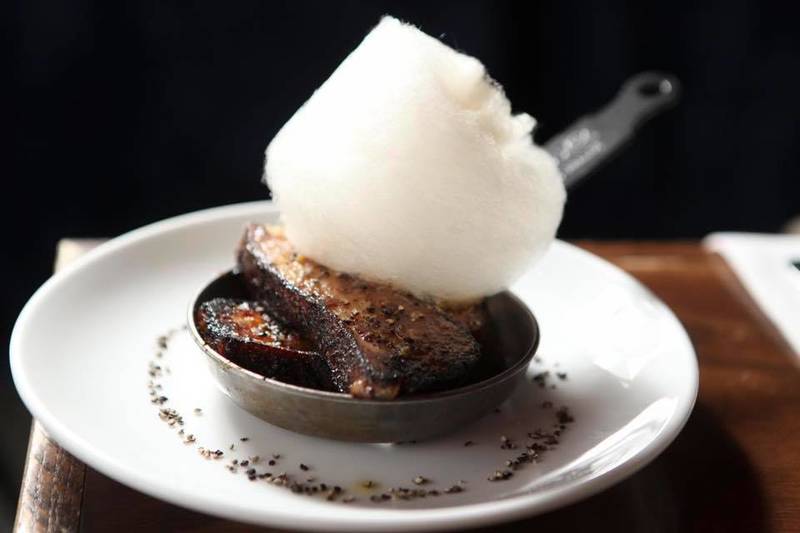 The Best Pork Dishes at Nashville Steakhouses
Not Now     x