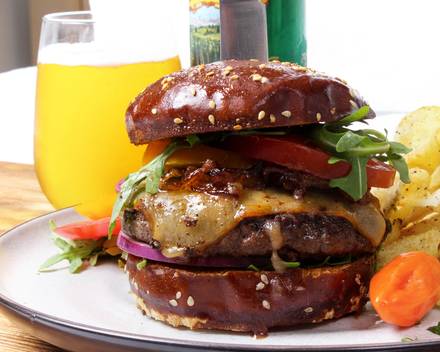 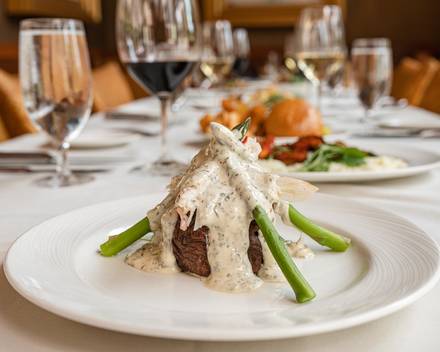 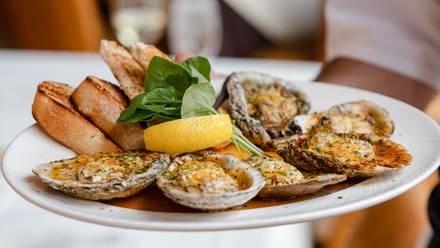 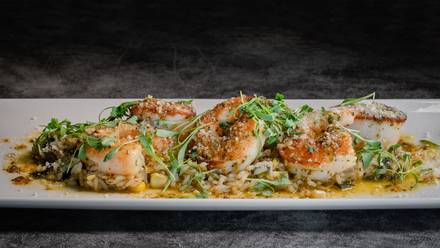 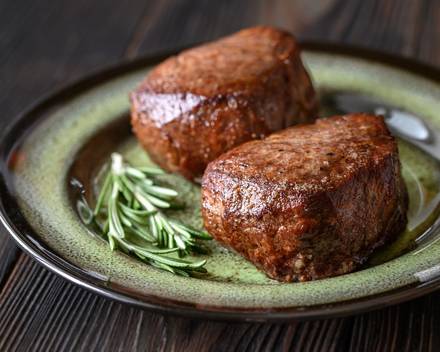 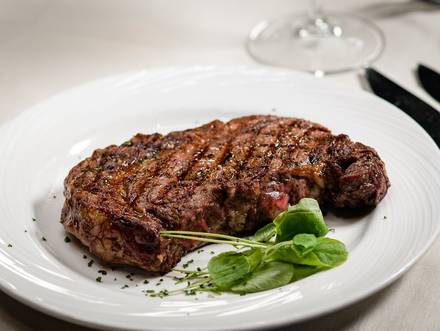 Eddie Merlot's founder Bill Humphries set to give guests a memorable experience at his restaurants the moment they step inside the dining room. The design element is "go big or go home" with picturesque windows, wall art, and salt shaker-like columns adding a whimsical vibe throughout the space.

Humphries is a wine connoisseur who named the upscale steakhouse chain in honor of one of his most loyal clients, a guy named Ed who happens to obsess over merlot. The restaurant aims to offer guests a classic steakhouse experience, with some surprises along the way. Beginning with the appetizer menu, the restaurant turns up the notch on everyday items, from the sweet and spicy tempura shrimp that come with a tangy sriracha sauce to filet mignon potstickers.

Steaks are USDA prime and offer an admirable price range. There's the signature burger that consists of a patty made from filet, New York strip, and ribeye for $17. There's also the New Orleans-style mixed grill, which is the chef's favorite. It's a four-ounce filet mignon, blackened shrimp, andouille, and mashed potatoes for $33. 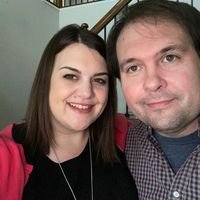 We went to Eddie Merlot's for a friends birthday and had a great time. Jason was absolutely fantastic and enjoyable. I had one of the specials - a sea bass...

Erick was awesome. He has waited on us before and each time he has been awesome. If you want great service, suggestions regarding the menu and a smile… ask for Erick!

Decided to drive up north to try something new for special occasion. Food was amazing! Atmosphere is nice but casual enough to not make you feel uncomfortable. Steaks were as good as Ruby's and crab corn chowder was the best soup I've ever had!! Highly recommend if you live in area or want to take a drive to discover something new!!

I recently visited the Cincinnati location on 2/19/22 as a guest for a birthday dinner. The reservation was for 5p, I and another guest arrived at about 5:10p. When we walked in, I noticed about 4-5 Employees huddled at the Welcome stand, looking uncomfortable and they just stared as we walked in. They did not greet us at all. I looked over and saw about 5-6 members of my group standing off to the side in a small area. By the way that we were not greeted, spoken to at all, and looked at uncomfortably, I could tell right away- that we were not welcomed. A member of my group stated they were told, all members of our party had to be present before we could be seated. At this point, there were 8 of us present. A member of our group asked to be seated, since 8 of us were present, and she was told all members must be present. My friend stated the majority of our party was present, and we would like to be seated. An Employee then stated, they had to wait for a table to be prepared. This confused me, because the reservation was for 5p, and it was already after 5, so I would think the table should've already been prepared. After a bunch of whispering from the huddled Employees, we were finally led to a table all the way in the very back of the restaurant. Keep in mind our reservation was for 5p, its now about 5:20p - as we were being seated, the Employee that lead us to our table stated " we will need this table by 8p, because we have another reservation". I was highly offended by this comment, and the audacity to feel that was needed to be said to our group. Our Waitress was very monotone and gave us no engagement I could tell that she was just doing her job with our group- no more, no less. We did not receive any bread until about 25-30 minutes later- after two other tables that came in later than our group had already received their bread. We asked a Server to take our group pic, and he agreed. As our group began to assemble, our Waitress came over and I saw her whisper to the Server and ask him what he was doing. They were whispering, but I observed that she said to him -just hurry up, and then she took the camera and pic herself. We finally received our meals (mine was not hot, and barely warm). About a quarter way through our meal, the Waitress had already brought out our checks out and had put them in the window sill. I do not expect for my check to be printed until I am at least asked if I would like desert, or asked if I am ready for the check. Needless to say, this was not a good experience for our group. The coldness and non-engagement of the Staff was appalling. And to tell us that there was another reservation at 8p and the table was needed by then was unnecessary and told me everything that I needed to know- If they must have us there- order our food quickly and go. I submitted a formal complaint on the company website and the Manager called me the next day and gave me an excuse for why everything occurred, including stating its their policy to bring out the check right after food is given at the table. This was not a good experience for me at all- I can't recommend this place and will not be back. 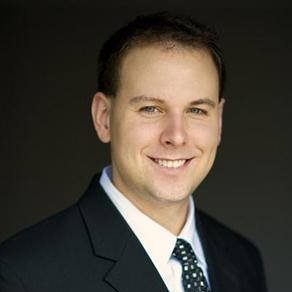 I'll admit, I was nervous about the bad reviews (Merlot's is definitely behind competitors in review averages). I pushed for us to go to a competitor...

Louisa, the manager on Valentine's Day, completely changed a mistake into a catastrophe. The steak was red...not pink (medium well). It was not cooked well. I had it recooked. The recooked version was also red-- darker exterior on the second run. The server solved the problem by taking the steak off the bill, but the manager came to our table with boxing gloves...ready to insult our definition or "medium well." She was combative and unnecessarily argumentative-- since the matter was resolved. When I tried to diffuse the situation, she rudely, arrogantly stormed away. Why was she so nasty? 2/14/2022

An interesting paradox, looks likes you stepped into a time machine in not a flattering way, yet some of the main dishes are quite unique and/or...

David was the best! He is so kind and welcoming. He truly made our night a memorable experience. He did not miss a beat when it came to service. He was the absolute best server. If you have him, you are in for a wonderful experience! Thank you, David, for everything you did for us. I wish you all the best in your career.