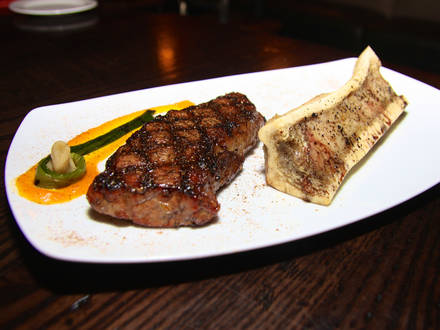 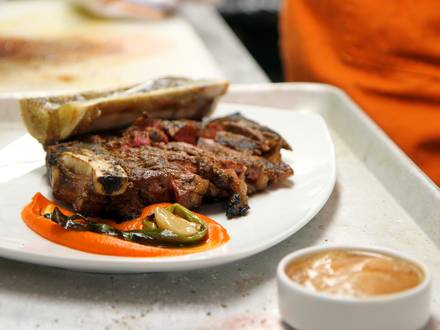 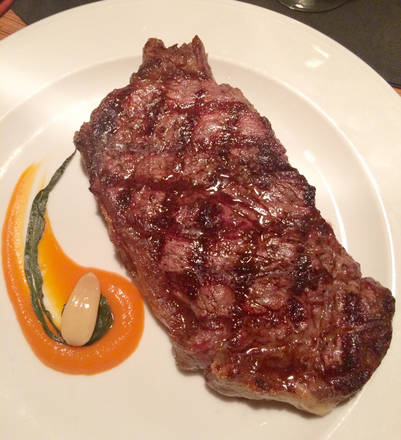 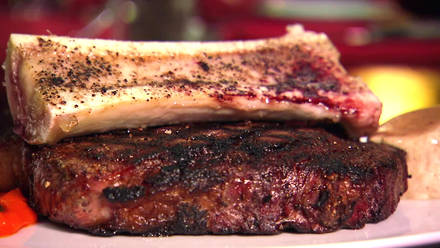 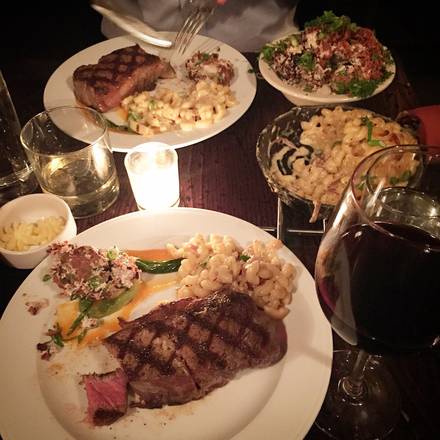 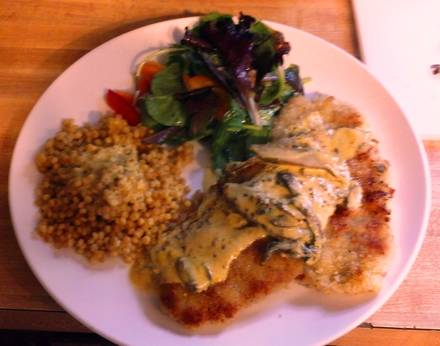 It's a secluded nook behind the wildly popular JM Curley, a boisterous gastropub that's garnered a number of accolades for its burgers. Bogie's Place, however, aims to be low key, and that's quite a feat for a steakhouse.

Named in honor of Hollywood legend Humphrey Bogart, the restaurant is 1920s inspired with 20 seats for dining. Reservations, of course, are required and they're hard to come by. The tiny venue used to host private parties as well as served as a space for JM Curley's overflow, but this concept was born out of one of the partner's childhood fascination with Bogart.

There's no signage outdoors. Instead, the owners decided to indicate that this place exists with a tiny gold-plated sign with an arrow pointing in the direction of the dining room. That's capped off by additional signage proclaiming “Adults only. Please no cell phone use.”

Inside, guests will find a dimly lit setting that includes studded-leather booths, diminutive private bar and classic jazz providing the soundtrack. It's the ideal atmosphere to appreciate the menu, which is limited, yet many of the classic dishes have been re-imagined with local ingredients.

For example, the iconic Waldorf salad is composed of Boston leaf lettuce, apple slices and raisins. A Wedge consists of a generous chunk of iceberg lettuce dressed with Maine cherry tomatoes, scallions, North Country Smokehouse bacon and a house-made blue cheese dressing. And the filet mignon is grassfed and originates from Maine family farms.

Speaking of steaks, there's also a Tomahawk, bone-in Porterhouse and bone-in New York strip on the menu. There's also a pre-theater menu, which is prix-fixe. For Bogie's, the offering makes sense because the restaurant is located in the heart of Boston's theater district.

This place caught me off guard. We were visiting Boston and got out late for dinner, and luckily they sat us. Once you go through a pub and through a portal you end up here. We just ate apps and a salad because they were closing, and it was the best octopus I ever had! Drinks were fantastic too. I think there were only three or four tables, so make reservations.

Geoffrey was our server last evening and he went above and beyond. He was professional and delightful. We truly enjoyed his expertise as well as his attention to detail and patience. We lucked out and at that time had the entire place to ourselves it was so delightful.

We come from up state New Hampshire, finding such a cozy place like this in Boston made us feel really lucky to have bumped into it. The steak, service and atmosphere was excellent 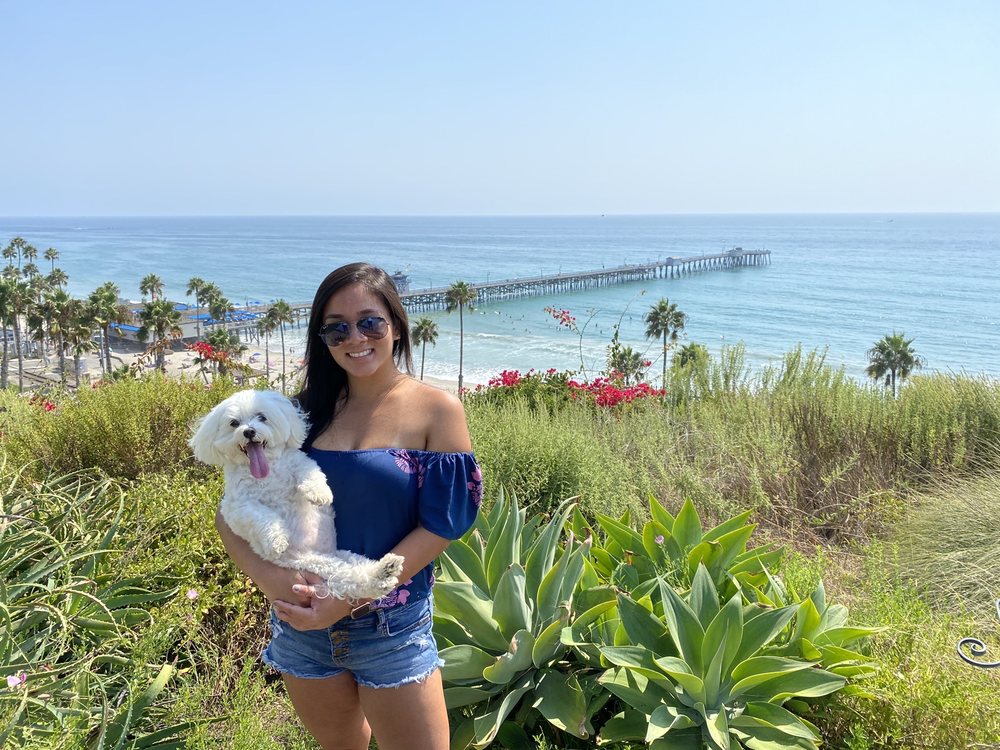 Speakeasy restaurant, now that is super cool! The restaurant is small, very intimate, & dimly lit (we had to use our phone flashlights to look at the... 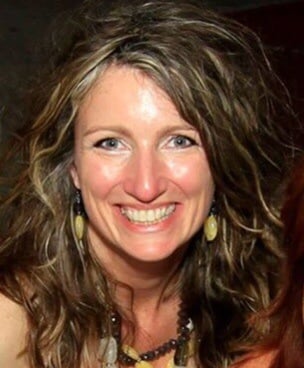 The best service and overall experience in Boston. We were greeted immediately and had the best craft cocktails " Call me Old Fashion" and "Wet Hot Mexican...

Waited 6 weeks for our reservation and it was definitely worth the wait. Service was excellent. Food and drinks were amazing. It was such a cool experience all around. Highly recommend checking this place out. 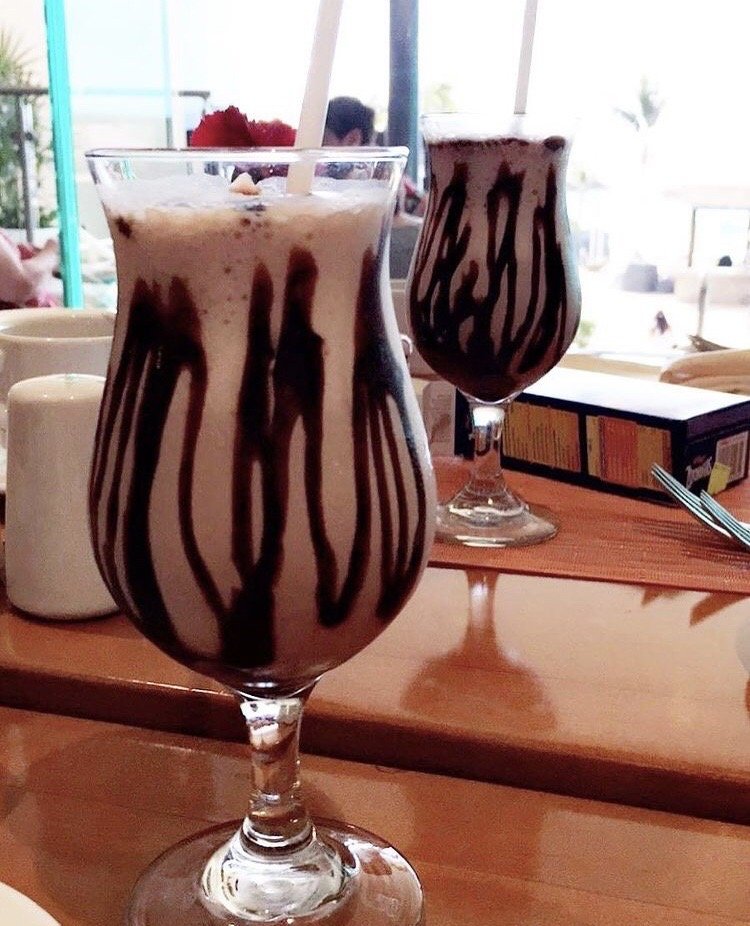 A cute little speakeasy downtown boston with all the vibes. Good and drinks are excellent. We recommend the "Old Smokey"- it was fun to watch being made and...

Quite intimidating, my first impression. Felt very uncomfortable at first with how the waiter presented himself to us, but as more people came in we felt...

A cute little speakeasy downtown boston with all the vibes. Good and drinks are excellent. We recommend the “Old Smokey”- it was fun to watch being made and tasted amazing!

Our dinner was fantastic. The ambiance was wonderful. Our waiter, Kevin, made our night perfect. I would go out of my way to go back and have another meal at Bogie's Place.

First of all...this is a very romantic place.  The ambiance screams intimate.  There is only 4 tables in the back room.  Me and 3 of my friends went here last night before the Celtics game:) Had I known it was a romantic place we would have obviously eaten elsewhere.  The food was very good, the drinks were good as well.  Waiter was great.   I would eat here again....with my fiance lol.

My bf and I went to Bogie's place for our anniversary. I didn't take any pics to appreciate the food. The cocktails were superb - probably the best ones in Boston!! The bartender was very professional. Will visit again for other menus ;)

One of Boston's best kept secrets! Phenomenal customer service and pleasant staff! Our server, Kevin, went above an beyond explaining what made each dish extra delicious an unique. My wife an I left very impressed! Recommending to all my loved ones! Great job! 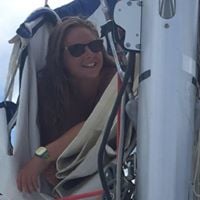 Absolutely wonderful experience! Everything was great, from the food and drinks to the ambiance and music. It's a very small intimate space which was great...