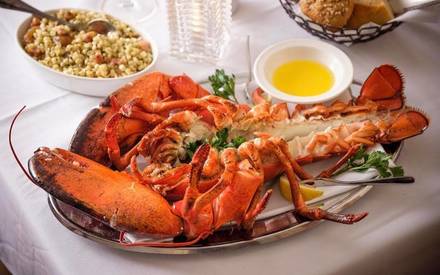 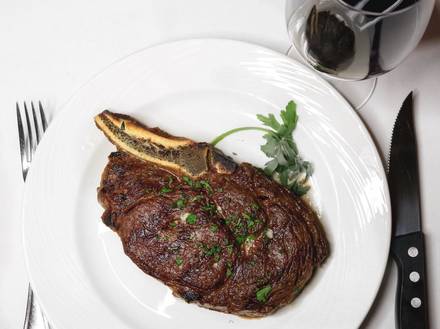 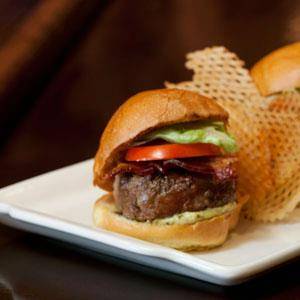 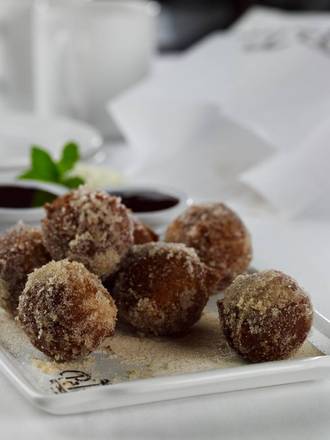 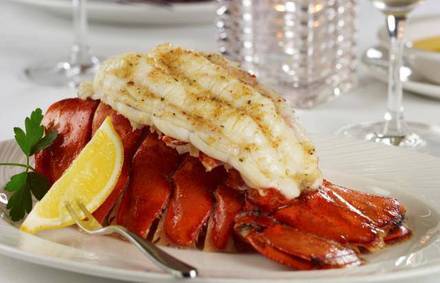 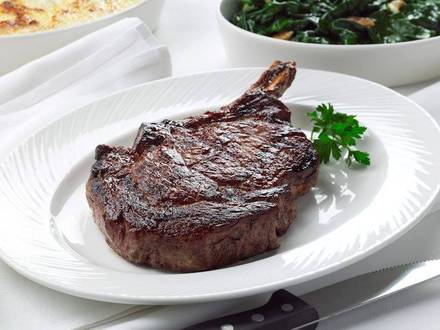 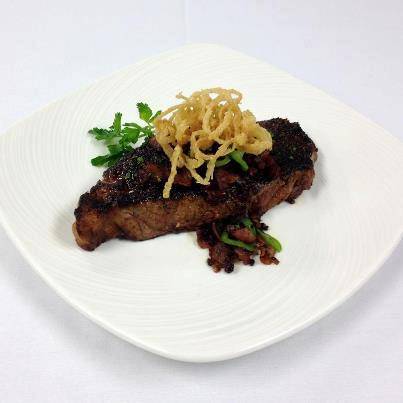 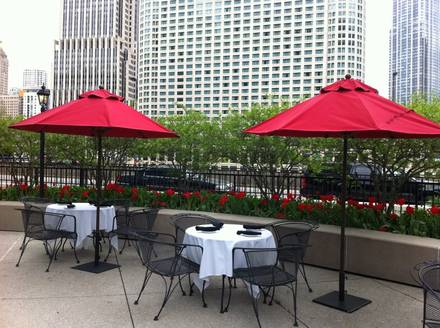 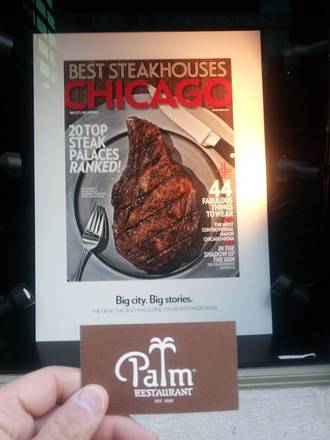 attracting those who like to have a great time while they’re chowing down on a great steak. It all started in New York, in 1926, when Pio Bozzi and John Ganzi opened the first Palm, founded on the philosophy that you should treat guests like your own family, serve them the best, and always exceed their likely high

But why “the palm”? Funny story about that. Both Bozzi and Ganzi wanted to name their restaurant after their hometown of Parma, Italy, but when they went to register their business, some jomoke at the New York City clerk’s office misunderstood their Italian accents. He issued them a license for “The Palm,” which turned out to be kind of a nice name, suggesting an elegant oasis of refreshment.

It may surprise you to know that steaks were not always a part of the Palm menu. In the old days, in Manhattan, when a customer ordered a steak, Ganzi would trot off to a Second Avenue butcher shop, buy a steak and cook it to order. After a while, Ganzi got tired of all the exercise, and steak was put on the menu as a permanent item.

You can have small or large sizes of filet mignon and prime New York strip, and many other cuts; on Saturday and Sunday, there’s a 26-ounce bone-in prime rib of beef.

As much as The Palm is known for its steak, it’s equally well-regarded for its lobster. The four-pound lobster was introduced to The Palm in 1965, and it quickly disproved the theory that meat from elephantine crustaceans would prove to be too tough to enjoy. That wasn’t the case, not at all, and lobster sales increased ten times in the next few years. The big ones served in Chicago include a jumbo broiled Nova Scotia lobster tipping the scales at up to a whopping five pounds. You might want to share that.

There are many additional seafood items, and for all the turf and surf protein, a respectable vegetable section featuring green beans, Brussels sprouts, asparagus and leaf spinach. You should really try some of those.

Befitting such splendid menu items, there’s a good-sized wine list with many, many selections by the glass. Signature cocktails include Hemingway’s classic daiquiri, as well as modern takes on familiar favorites like the Moscow Mule and the Sidecar.

Popular desserts include Key lime pie, crème brulee, and a bag of doughnuts.

As you sit in The Palm’s dining room, you’ll see walls festooned with caricatures of famous locals. Here’s the story on that. When The Palm first opened in Manhattan, there was not much money to decorate, so there were a lot of bare walls. As it turned out, The Palm’s Second Avenue location was close by the King Features Syndicate, the home to the artists who dreamed up and drew many of American’s most recognizable cartoon characters like Popeye, Batman, Beetle Bailey and Hagar the Horrible. Artists at King Features would trade their talent for dinner, drawing local notables in pastel and chalk, and getting a meal in return for their troubles. As the company grew and expanded, this tradition of decorating the walls of The Palm with caricatures has been carried across the country and around the world. Today at the Second Avenue location, only five caricatures can be added every year due to space constraints. “Making the wall” – getting your face immortalized through immurement – is a point of pride for New Yorkers, Chicagoans and many local celebrities everywhere.

Crain’s Chicago lauded The Palm as one of the ten best steak restaurants in Chicago, adding these criteria: “Great food, for sure. Service that gets you out quickly without rushing you. But more than anything, it might be the vibe. Glitz and glam work fine after dark, but not so well by daylight, when you want a different kind of energy. In the best spots, you get the feeling that big things are being discussed, plans hatched and ambitions realized, along, of course, with gossip exchanged and laughs laughed. And everyone, not just the regulars, is treated like a member of the club. Being able to relax over a rib-eye in the middle of the day – how great is that?”

Excellent service and totally professional. The wait staff here is 5 star. The eggs Benedict is my go to morning breakfast and it was well prepared and tasted perfect! I highly recommend this restaurant for a special time.

Arrived late at the Swissotel, and was pleased to see The Palm still open and serving food for weary travelers. The bartenders were friendly and welcoming, and I ordered a chicken avocado sandwich from the bar for $18. The sandwich and fries were tasty, and a decent late night snack.

I stopped in last night for a quick glass of wine after work. The bar was bustling as a Friday should dictate. I grabbed a seat at the bar. It took a...

What can you say about a classic steakhouse in a city famous for their steaks? The Palm has been relevant in Chicago for decades. I remember dining here... 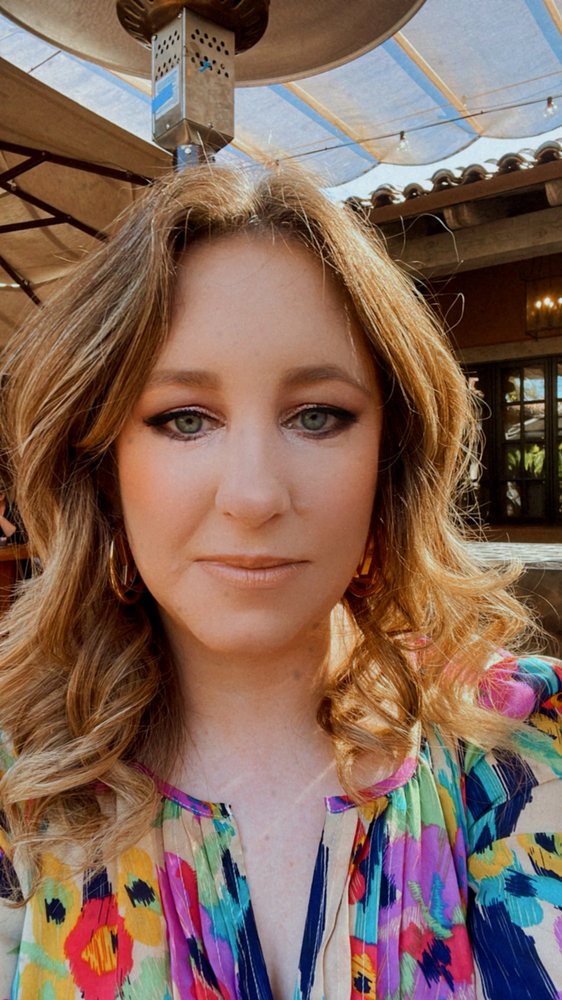 Cheeseburger was good, French fries were good, beautiful restaurant BUT not very well run and bad service. They were extremely busy during an off hours week...

Fabulous in every regard. Luis was phenomenal, attentive, knowledgeable very pleasant. The rest of the staff that worked on our table were also swift and attentive. If you just looked up they saw you, and got what you needed. HIGHLY recommend.

My wife and I came here because we were staying at the Swissotel and it was overly convenient with us being tired from work + travel. As we sat at the bar and reviewed our options, we realized the minimal options. I ordered a salmon meal and my wife ordered the lobster bisque. My salmon was raw in the middle and I could eat about 1/3 of it. Crazy considering it was $44! My lobster risotto had parts that were hard and it didn’t seem like it cooked evenly throughout. The lobster bisque was incredibly runny and honestly did not look appetizing at all. Our drinks were good, but I cannot recommend this place for an actual meal based off this experience. The price for what we received was extremely subpar and not worth the $$ we paid.

Dinner at The Palms restaurant was excellent. This is fine dining at its best. The service was impeccable. The food was delightful. I was so impressed! Thank you.

Years ago this place was THE. BOMB. The past 4 or 5 times in Chicago, I’ve been to the palm and unfortunately, it’s a desperate try to compete. The lunch at the bar is quite lovely. The dinner is a joke, ICE cold 12oz. $70 Filet Mignon, served as dinner was the clincher for me personally. I even had the waiter touch, his reaction was PRICELESS due to the fact, it was ICE COLD as in straight out of the refrigerator. My dinner companion had the Sea Bass, so much salt in the sauce it was 100% uneatable. Avoid the Palm, it’s not what it was and it’s not getting any better. Morton’s down the street holds its own, if you’re looking for an “ old school” midwestern steak, it’s better and they usually get it right.

The food is consistently good, though it's tough being a steak restaurant in Chicago! Their filet is never a bad choice. I'm not a cheesecake fan, but my better half said it was well done. The bartenders are witty and professional. They have a great drink menu with a bevvy of special liquors.

Great food, I had lobster bisque and chicken Parmigian, both very good. Nice atmosphere. Our waiter Luis was wonderful, helpful, always smiling, and great sense of humor. All the staff were very kind. 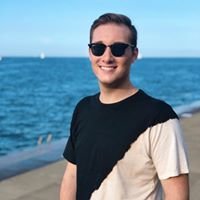 My friends took me to the Palm for my birthday for before dinner drinks and appetizers. We were seated promptly by the hostess and that's where the...

Had dinner here tonight with my family and we enjoyed ourselves! The food was fantastic, the service was top-notch and just being in the presence of my family as we ate and talked just took everything to a whole nother level. This is a great place for families and it's a great place for a date night, The Palm will leave you happy 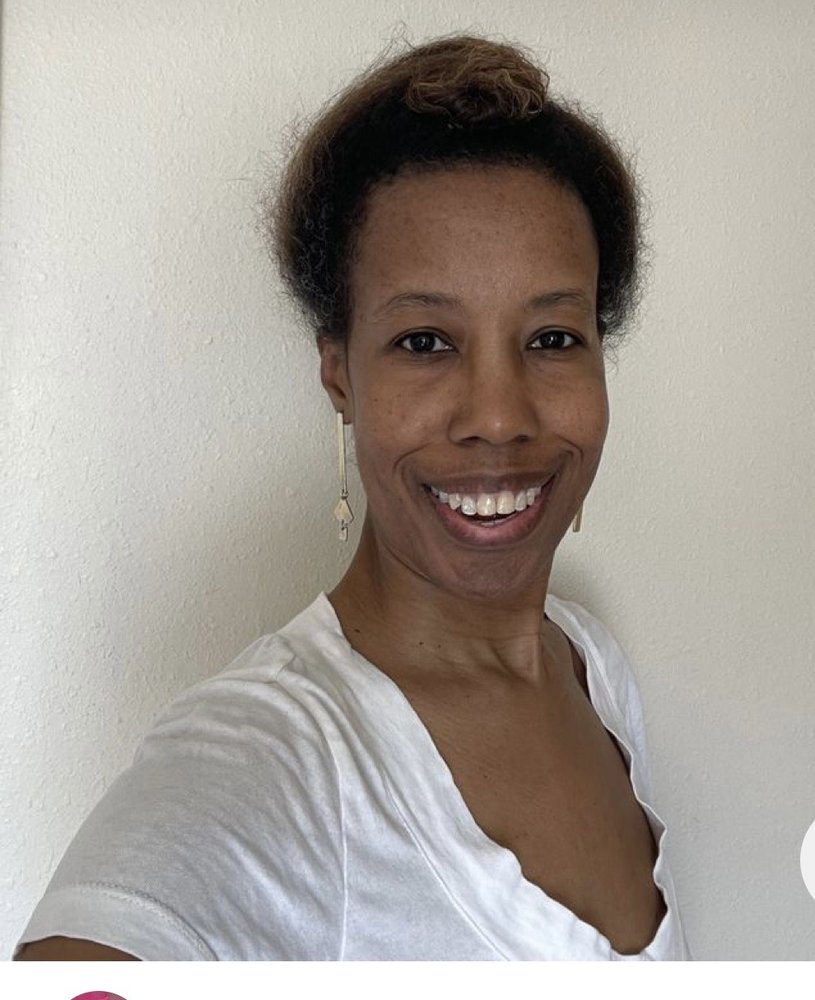 I dined here because of a conference I attended nearby and Beatrix, a restaurant around the corner, was booked. My meatball sandwich was edible and mediocre...

If you're planning on going to Chicago, better be fully vaccinated. Otherwise you can't get into anything. You can stand in there long enough to get your takeout ready.