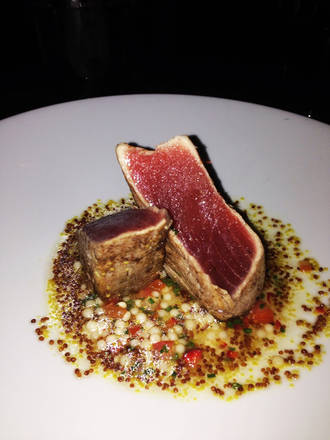 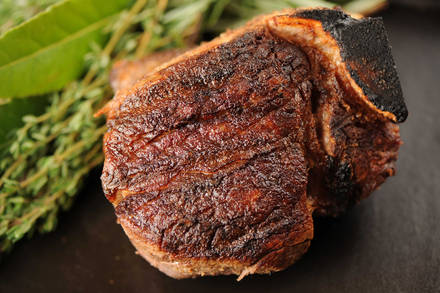 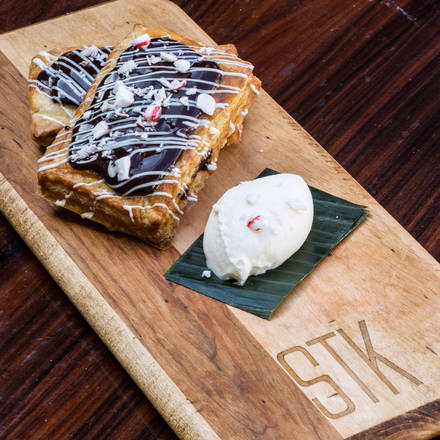 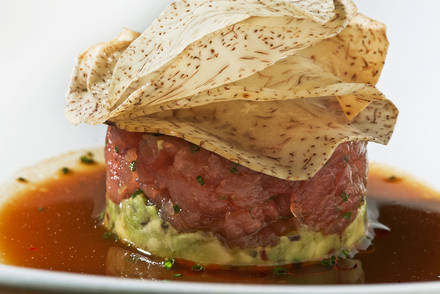 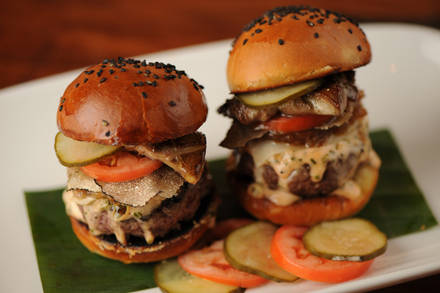 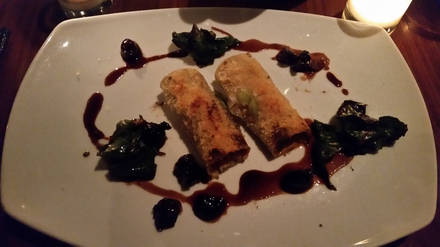 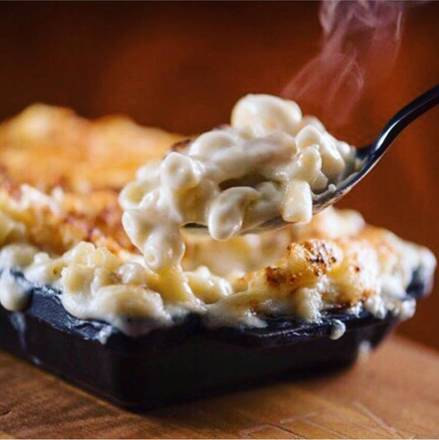 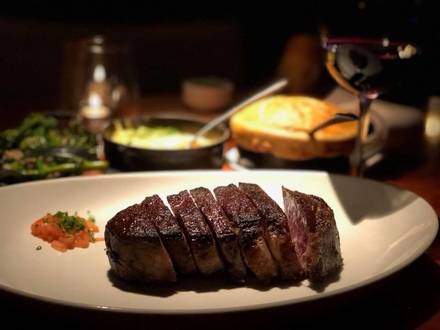 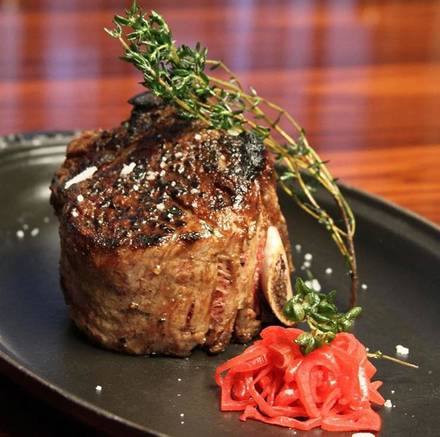 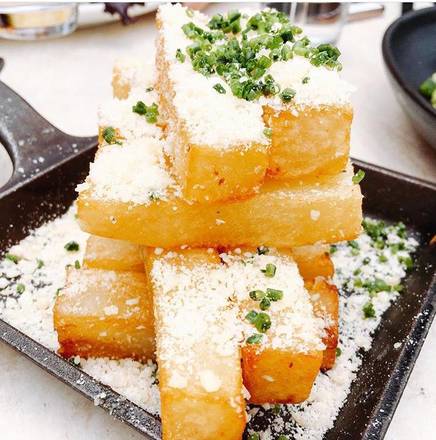 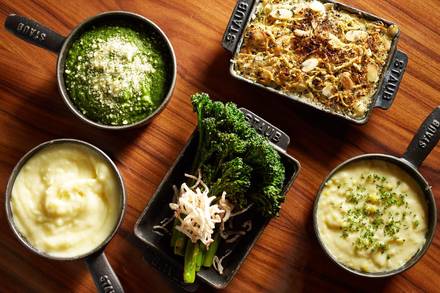 STK Chicago is probably the most beautiful steakhouse we (and maybe even you) have ever eaten in.

The sleekly cavernous restaurant seats 210, and houses a central bar, a wine bar, three private rooms hidden from view behind purple-tinted glass…and a DJ. Of course there’s a DJ. If you didn’t know better, you might think STK Chicago was as much club as steak house. The dress is sharp, and the STK Chicago website recommends:

"For the ladies, throw on a LBD* and a pair of your favorite heels. For the gents, grab your blazer, throw it over a collared shirt and add the final touch with dress shoes."

The One Group, which manages this and other STK locations, described STK Chicago as the "sexiest steakhouse experience you've ever had." And when you make claims like that, you can expect some pushback. To wit, smart/snarky Chicago food writer Michael Nagrant of Redeye lets his prose go slightly purple with descriptions like:

"The crowd was eclectic, a healthy mix of the clubbing set, over-tanned Viagra triangle denizens exploring beyond their natural Gold Coast habitat and tailored-shirt-wearing, might’ve-played-quarterback-in-college hunks.”

STK Chicago attracts a good looking bunch of humans, but hell, they let us in, so apparently anything goes. If you can try to avoid being distracted by the gorgeousness all around you, you will take the time to appreciate the food, which is well deserving of your time.

As there is an undeniable party vibe in the air at STK Chicago, you might start with some seafood for the table. You can choose from oysters, shrimp, king crab, mussels, ceviche and clams. If you came with just a date, consider sharing with the folks sitting next to you: the closeness of the tables here is designed to facilitate fraternization, and everybody comes to have a good time.

If you’re not a red meat fan, what are you doing here? Just kidding. There are non-beef options like fried Amish chicken, herb-crusted rack of lamb, Alaskan black cod and grilled lobster Rockafeller (no idea why it’s spelled that way, but as with oysters Rockefeller, there’s spinach involved).

There are the usual sides of Brussels sprouts, asparagus and mac n’ cheese for the traditionalists, but there are also some curve balls for the younger set, including tater tots, foraged mushrooms and jalapeno cheddar grits.

Steak, though, is why most of us go to STK Chicago (that, and the party).

Anthony Todd in Chicagoist had nothing but good things to say about his strip steak and the service that accompanied it:

“The central question of any steakhouse is: Can they make a steak? The answer at STK is yes, in spades. The steak was absolutely, 100 perfect—and moreover, they paid attention to detail. I ordered a rare skirt steak, and a manager-type with an earpiece came out to make sure I actually wanted that, since rare skirt steak can sometimes end up chewy. This is just the kind of service you want when you're ordering pieces of meat that can range up to $70. Pair it with a side of crisp broccolini (to make you feel better about downing 40 ounces of meat) and you've got a heck of an evening. Verdict: Super sexy, if a bit fattening.”

At a place like STK Chicago, we’re going to assume you’ll be having a pop or two. We especially liked the “juice boxes,” which feature juices of fruits and…kale (don’t run away; it was actually pretty good). Along with these house signature cocktails and all the classics, there are focused wine and beer lists. This is probably not the place to blow a paycheck on a contemplative Bordeaux (even if they had one on the menu, which they don’t). This is a place to drink a little, eat your fill of good steak, and then dance all those calories away to the DJ’s tune. 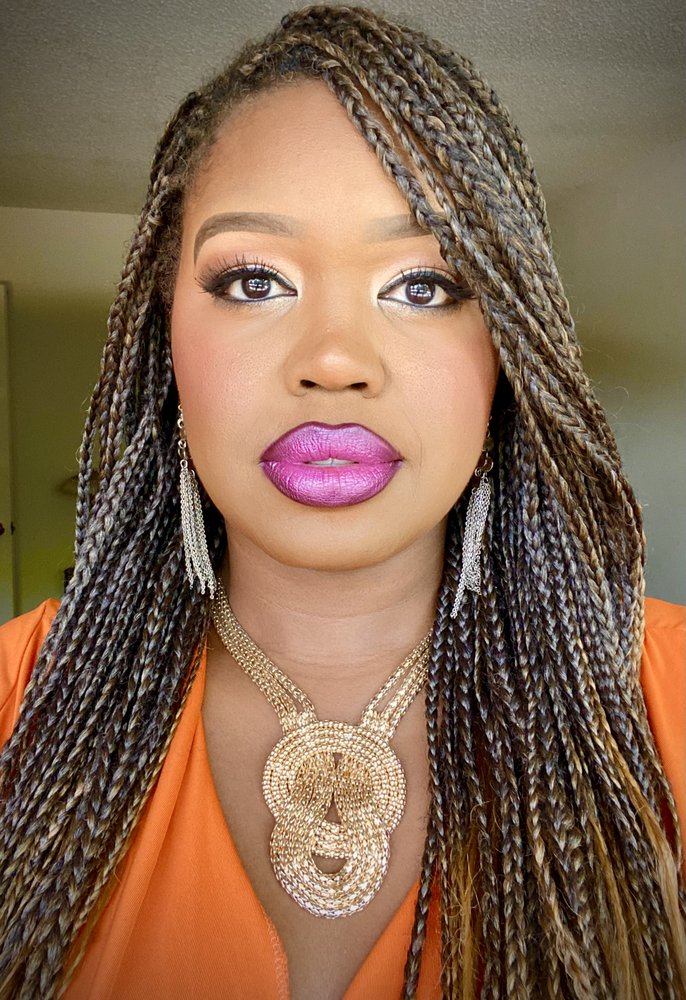 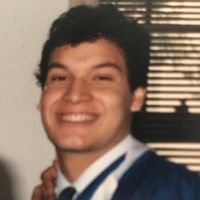 This place is amazing if you want excellent food great service ( host from Dallas was very professional and made my whole family feel welcomed). Do not pass...

Our large party had a blast here during happy hour on our 1st afternoon in Chicago. The server had the right energy to make it possible for 13 people to enjoy themselves. The decor was on point, and the food and drinks were very good! I don't remember hearing any music even though it may have been playing. My only complaint is that they don't split checks up, but that was a continuous theme throughout our visit. I would recommend and also return if ever in Chi again. 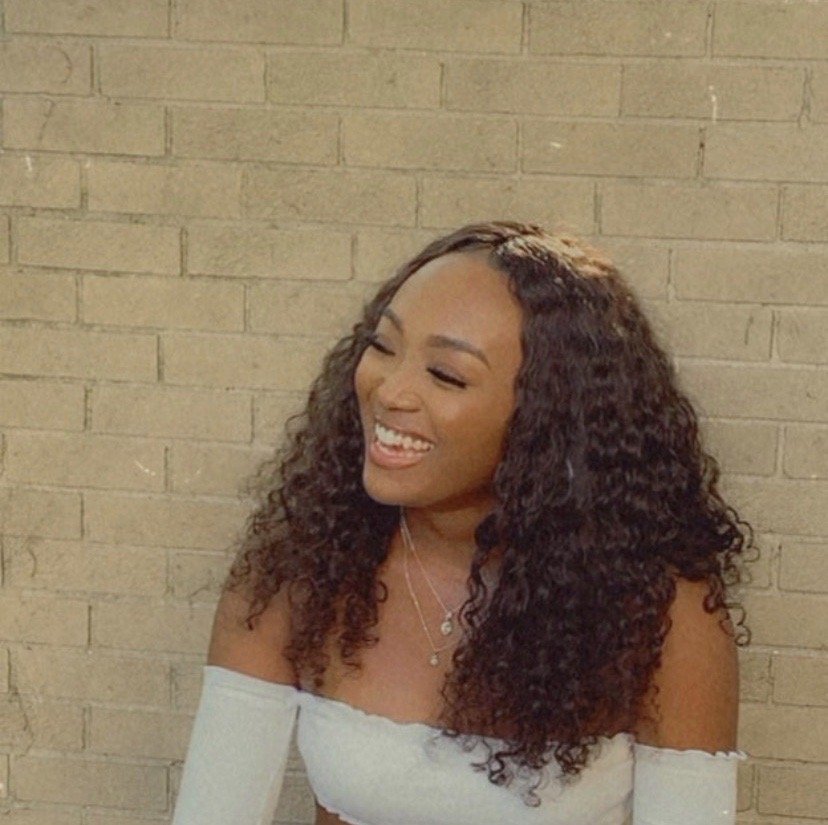 So we just had our Anniversary Dinner here and it was soo good! Bria was a great host. Her drink suggestion was spot on. We loved it. The bread was...

Not a good choice. Clearly the concept is a draw, and the organization runs a chain of these through various big cities. I don't mind that; when done right... 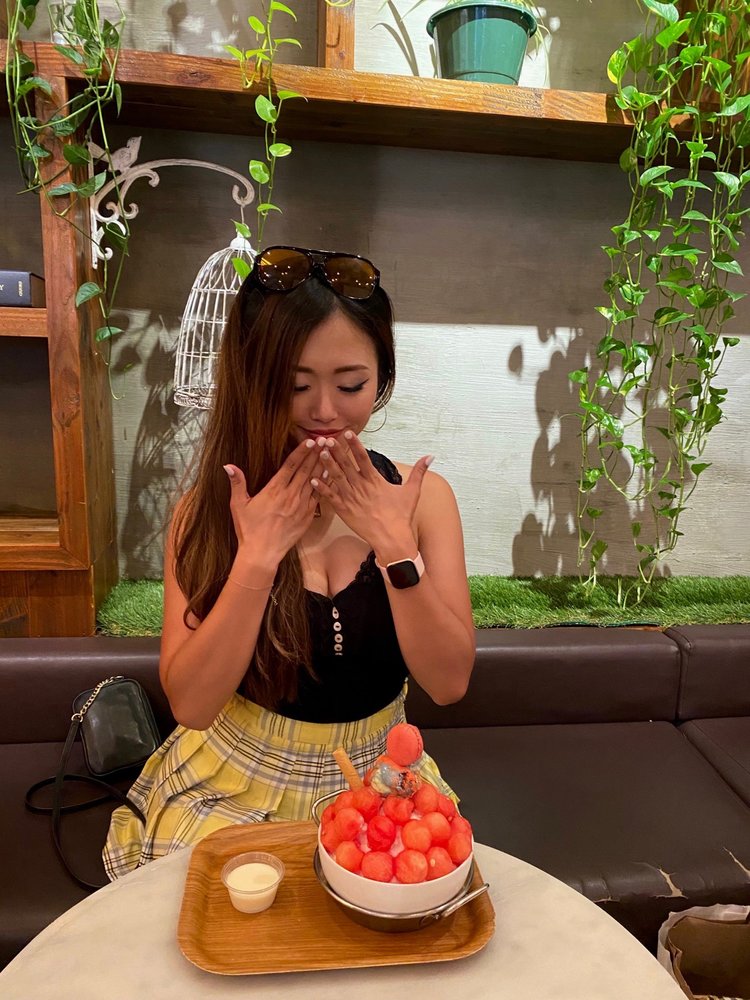 First time at STK Steakhouse! We had a reservation at 7:30 on a Friday. It was packed when I got there and all the reservations were behind, there were a...

Marissa was our server. You definitely have to pay a lot here but you get what you pay for. Very fancy. I appreciated the customized service. The food was divine, service was prompt and polite, and the facilities were nice and clean. The drinks are excellent as well. Very satisfied customer. 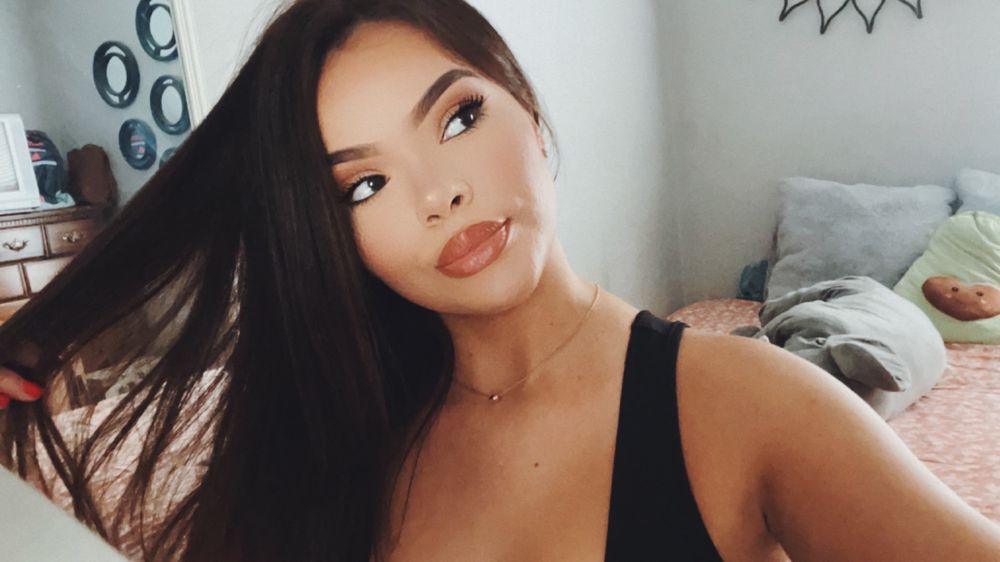 Such great food KEVIN is the guy to go for your server very detailed an such great energy an made sure our table was good an on top of our drinks an food... 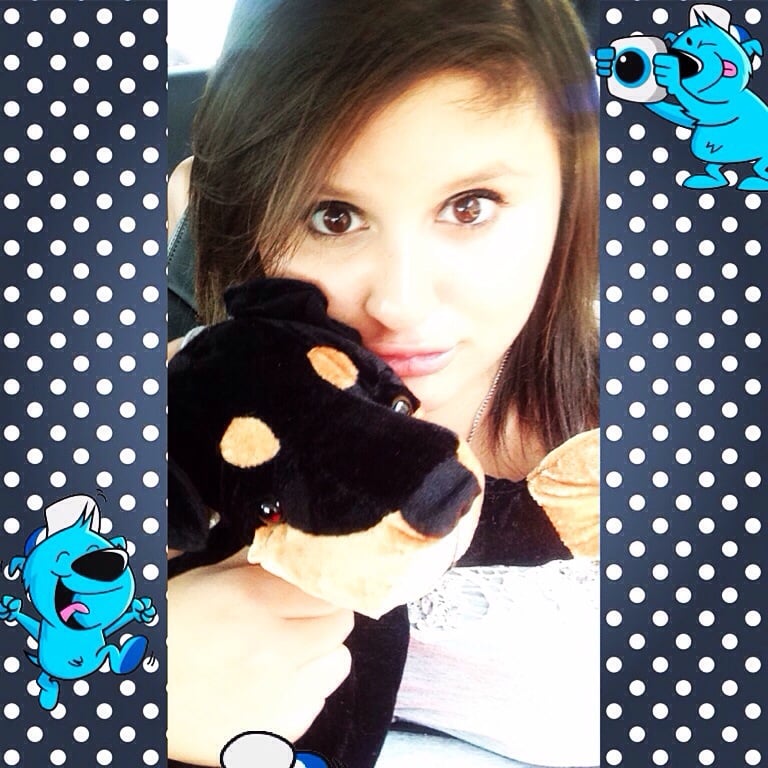 Food was phenomenal and our server Kevin was fantastic. I have nothing but positivity to say. If you can request him as your server Please do.

I'm visiting from Connecticut and I frequent a lot of STKs around the country and the Chicago location is my NEW favorite! The bartenders Warwick and Vladimir were PHENOMENAL! They really made my girls night truly special. And David the server was amazing as well! He kept us laughing all night! Such a great experience! Thanks guys! 💜

STK Steakhouse was AMAZING!!!!! The food was delicious and the service exceeded our expectations. Bria was an AMAZING server! The managers were attentive and had a sense of humor. If you’re looking for a good drink ask for the “Vlad” special (he’s the bartender). Thanks so much for helping us make a memory that will last a life time!

On Father Day 2022, Ms Bria was our server. She provided excellent service. Being our first time at STK, she broke down the menu for us, made meal suggestions and explained entrees. Service was quick and efficient and Ms. Bria was attentive but not overly, just right. Ms Bria's excellent manner and the ambience quickly made us comfortable, ready to receive a wonderful Father's Day meal. We were not disappointed! STK Steakhouse great place and we shall return! 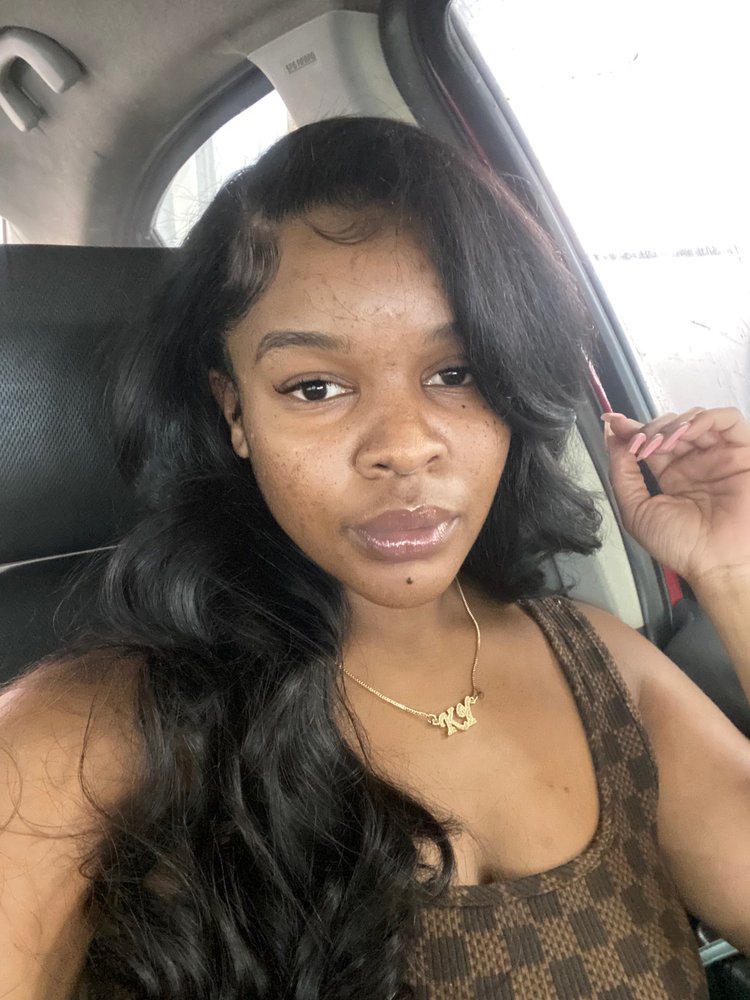 My sister & I were visiting from New Orleans & decided to stop by on a Thursday for happy hour. There was no wait, and we were greeted by our server Elisha...

Had a pretty poor customer service experience. My wife and I made reservations and we were pleasantly greeted and walked to our table but nobody came or even acknowledged us for the first 7 minutes or so. Not even water. We saw the table next to us who had been sat before us and they also still didn’t have water. We were also seated under a super bright neon sign. We decided we would probably enjoy the bar more so moved there. Ordering drinks was fine and the manager comped them, which was nice but then we never got service again. I finished my martini and the bartender took my glass and didn’t offer another. We were going to do at least apps so I could try the food (my wife has been and really liked it before) but nobody could seem bothered to help us. The bartenders all had a very arrogant attitude as if they would be doing us a favor by even talking to us. I would maybe expect this in NYC or Miami but wow, not in Chicago. Writing this from Tao, which is about a 10 minute walk. So far, great service, drinks and food! Highly recommend.

We had an excellent time here for our anniversary. Everything we ate was delicious, the atmosphere made for a romantic dinner, and the waitstaff was helpful and friendly. The price isn't cheap but you can come here for a drink and an appetizer without spending an absurd amount.