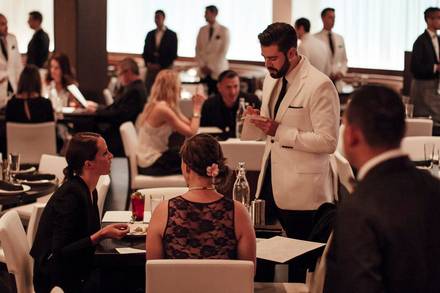 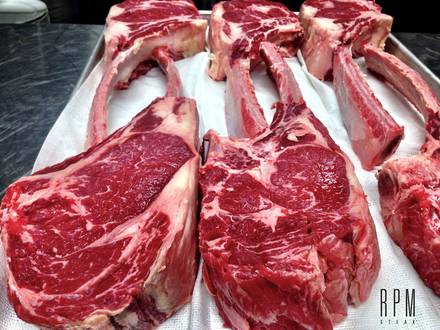 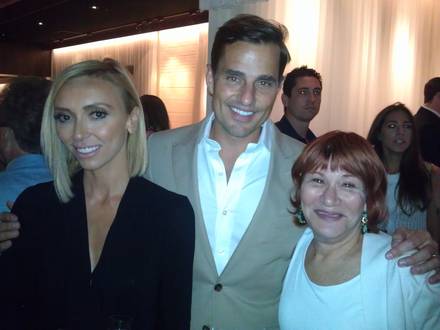 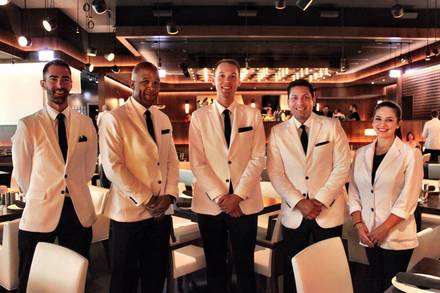 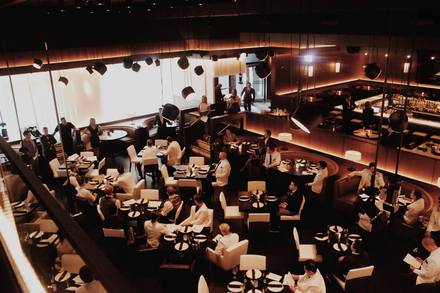 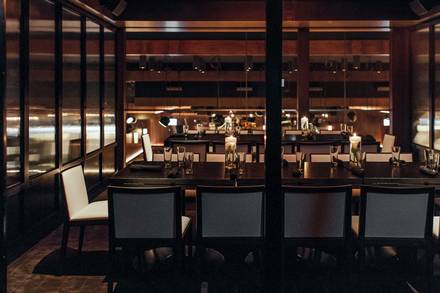 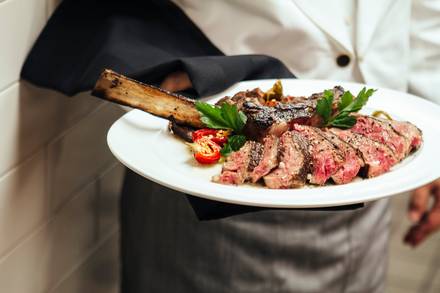 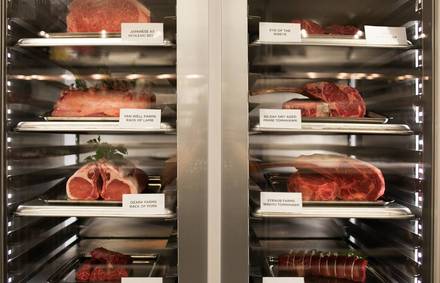 A chef-driven menu is expected fine dining restaurants. At RPM Steak, Chef Doug Psaltis (The opening Chef) does the Chicago steak house Italian-style; RPM Italian is around the corner. Chef Psaltis is the “P” in RPM Steak; the “R” and “M” stand for the Rancic and Melman families who co-own the restaurant. Rich Melman, of course, is the legendary Chicago restaurateur and the man behind RJ Grunts, Shaw’s Crab House and many other restaurants in the Lettuce Entertain You Enterprises empire. Like other LEYE outposts, RPM Steak is beautifully appointed, in subtle tones of black, white and gray, with lots of rich leather and wood, feeling as much like a club as a dining spot (though without the blaring music! Young people!). The room is designed for comfort as much as style, with sleek banquettes, suitable for merry-making groups or couples who just want a little privacy. Like many LEYE restaurants, it’s the kind of place you can bring business associates, a date, or a couple of friends and always feel like the place was made just for you.

Psaltis specializes in superb steaks (more on that in a moment) but what truly sets this steakhouse apart are the dozen fresh pastas made daily in-house, including pork and beef cavatelli, asparagus Agnolotti and prosciutto tortelloni. Other Italian touches to the menu include salumi, housemade focaccia and prime beef meatballs.

There are abundant fish and vegetable options; as food critic Phil Vettel wrote in the Chicago Tribune, “Psaltis treats his non-steak entrees with respect as well; the coal-roasted chicken has garlicky flavor and lacquered skin that's almost brittle in its crispness. A half-dozen seafood selections were augmented one night by Dover sole, in classic sauce meuniere, and I'd certainly opt for that indulgence again. The current indulgence from the kitchen, now that white truffles are in season, is creamy risotto, topped tableside with enough freshly shaved white truffle; the dish is nominally an entree, but probably works best as a shared side. And speaking of shareable sides, the vegetable offerings include a Millionaire's Potato, a double-baked, huge potato loaded with fontina cheese and shaved black truffle.”

If you’re a vegetarian…what in the world are you doing in a steakhouse? Never mind, but if you happen to find yourself here, you’ve got some good options: there are inventive salads and seasonal mushrooms, and of course you can order just straight-up pasta with or without cheese or butter. Salt-roasted beets are so good and so rich and red that you might almost think you’re eating meat.

So okay, okay what about the meat?

RPM Steak features around fifteen different cuts of steak, including steak grigliata, milk-fed veal chop and, get ready for this: prime, dry-aged bistecca Fiorentina. This is the stuff of legend. Perhaps the best known protein of the Florentine region, bistecca alla Fiorentina is a thick cut from Chianina cattle, a rare white breed still seen in the Tuscan landscape, where it’s frequently served medium rare or rare. The price for this steak is around $150, and you most definitely do not want to try to eat it all by yourself, unless you’re really, really super-hungry; it’s a Porterhouse that the menu says can serve up to four.

Beef is sourced from expertly curated purveyors across the Midwest and around the globe. An impressive range of cuts include prime dry-aged and Japanese-style wagyu as well as bison and locally raised, grass-fed beef. Other menu items include a 20 ounce grass-fed ribeye from Slagel Family Farm in Illinois; a 28-day prime dry-aged New York Strip from nationally known aging houses and the 5-ounce Japanese Wagyu A5 strip steak, which is the kind of steak you’re going to be telling your grandchildren about.

For all this luxury dining, you’d expect a wine list to match, and that’s just what you’d get at RPM Steak. There’s a very long list of wines by the glass (many under $20) and half-bottle, with many Italian and Italian-type wines (e.g., Pinot Bianco from Los Carneros, Ribolla Gialla from Napa), including, for the big splurge dinner (and isn’t indulgence what steakhouses are all about?) some outstanding selections like Bolgheri Superiore, Tenuta dell'Ornellaia, "Ornellaia", 2001 (which will run you over a grand) and Langhe, Gaja, "Sperss", 1997 ($3K).

For mixed drinks, there are the necessary classics (Old Fashioned, etc.) and also Italian inflected cocktails like the Bellini and Negroni, which seem to fit perfectly with the vibe of this place.

Desserts at RPM Steak are taken as seriously as the steak. A mind-blowing 14K chocolate cake is a mix of dark and milk chocolate, flecked with real gold (don’t worry, it’s edible). For simpler tastes, there’s gelato and affogato, and if you’re into the whole “for the table” thing, there’s a bomboloni, cooked-to-order Italian brioche doughnuts, dressed with Nutella and powdered sugar. Indulgence, defined. 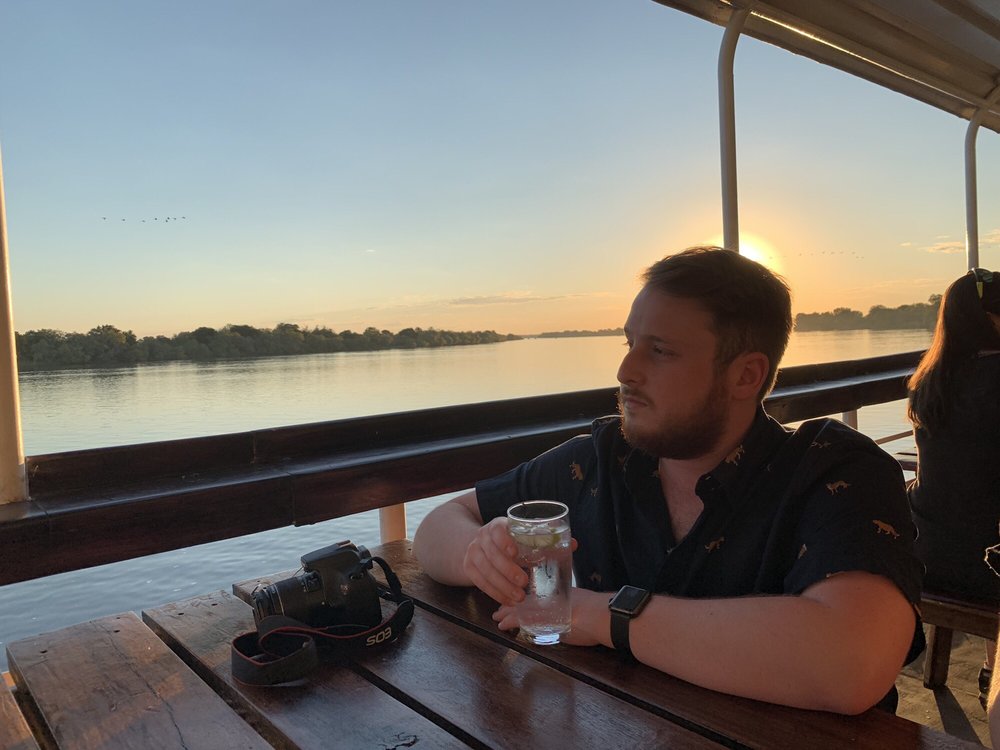 I've been to a handful of different steakhouses in Chicago but I think that RPM has to be one of, if not the best that I've ever been to. Our waiter Matt C.... 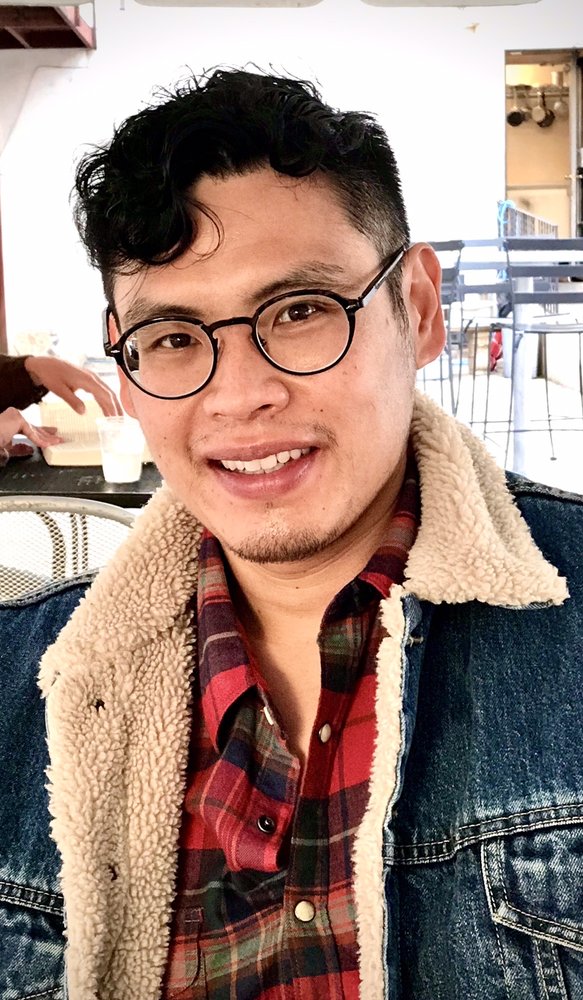 By far my favorite Chicago steak restaurant, I prefer the dry aged steaks for that richer flavor. But don't hold back on the sides (the fries are next next... 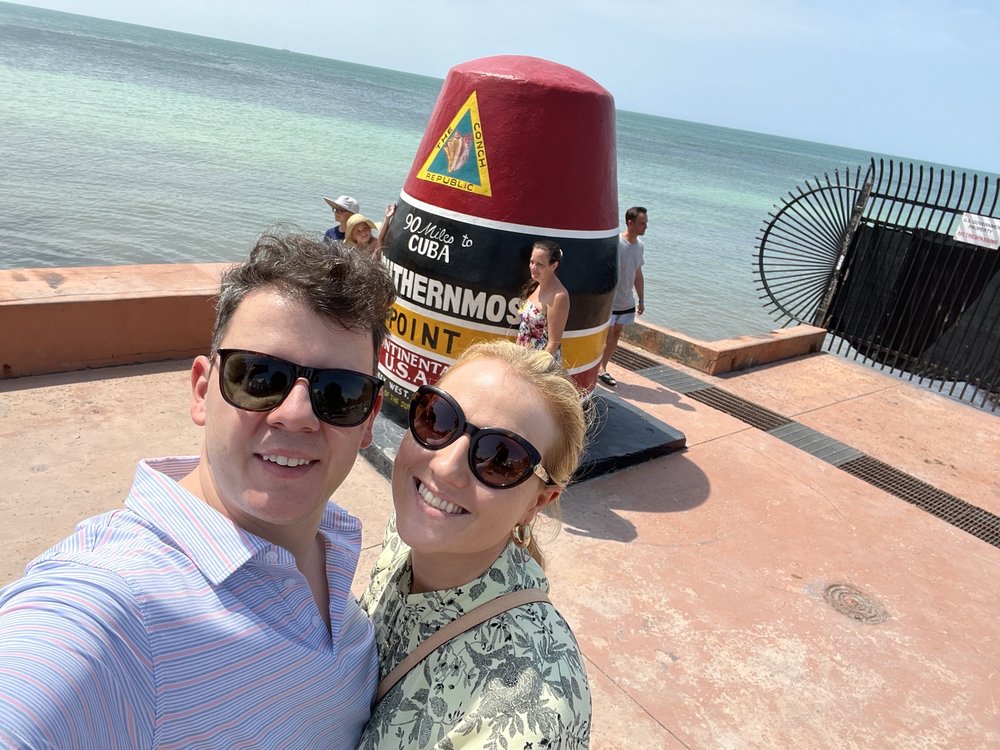 A little disappointed on the service and food we experienced here yesterday. Compared to other steakhouses in Chicago this does not make it to the top 10....

Seriously, this place is one of the best. The menu is expansive and has so much to offer- interesting cuts of steak, amazing specials every time I come, top... 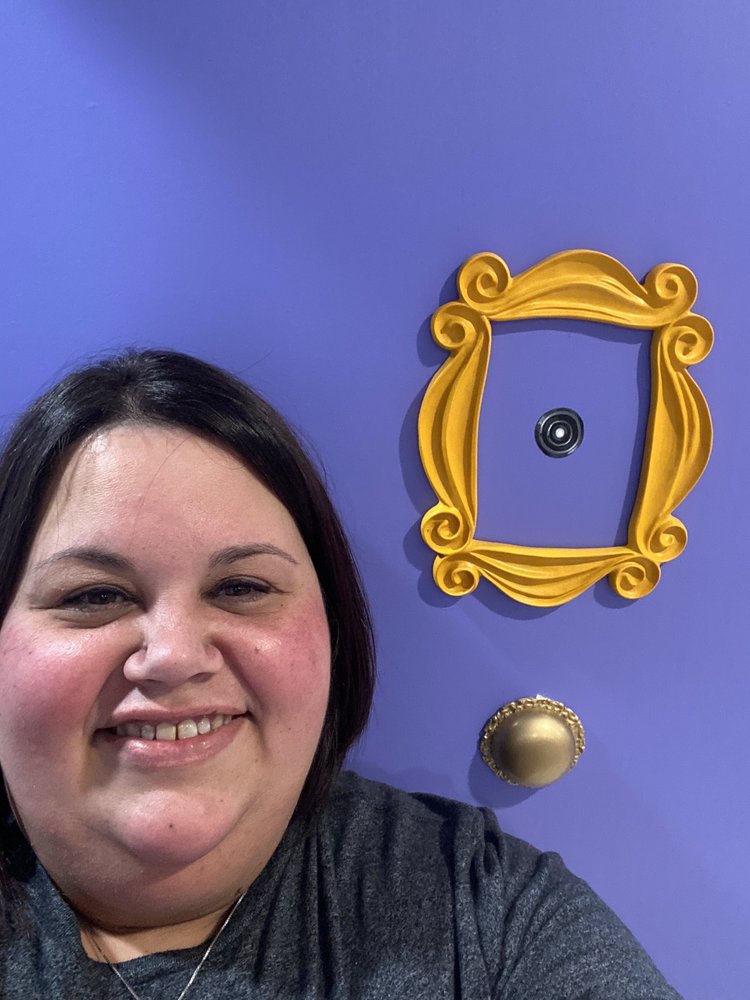 My friend and I had been dying to try RPM Steak for a very long time. We originally had a girls weekend in the city planned in 2020 but, like many, COVID... 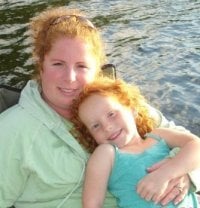 From start to finish, our service experience was superb. Reservation was adjusted for us by attentive management , which allowed us to enjoy the full...

Very nice place. The server was friendly and observant. Meat quality and flavor was excellent. The steak was cooked just right and the truffle sauce delicious. Only gripe is that for the price, it only gets 4/5 stars as I have had better value for money.

Dined here on Labor Day and thoroughly enjoyed my experience. The atmosphere, ambiance and customer service were terrific! The steaks are high quality, wine list is extensive and cocktails are top notch. All in all, it was a bit pricey, but well worth the splurge!

The customer service was great. I went with 5 other people and our waiter didn’t miss a beat. The food delicious. I had the poached lobster tail with butter, Greek lemon potatoes(I think that’s correct name) and 3 amazing drink that was made with carrot juice and casamigo(forgot the name). Everyone enjoy their food and drinks. I will definitely continue to come because of the food and the view of the Chicago river.

This is my go-to Steakhouse in Chicago. The staff is the best, especially my man Cam in the main dining room. The food selection is top notch and their steaks are all the highest quality. Don’t skip the wine list and enlist Kat for help, she will steer you in the right direction, and life is always better with good wine.Make this a regular spot and you won’t regret it.

Been here many times. This visit was for a wedding anniversary. Sat outside, even though they can not control it, it was very funky having people walk by...

This is my go-to Steakhouse in Chicago. The staff is the best, especially my man Cam in the main dining room. The food selection is top notch and their steaks are all the highest quality. Don’t skip the wine list and enlist Kay for help, she will steer you in the right direction, and life is always better with good wine.Make this a regular spot and you won’t regret it.

Hi end fine dining restaurant. Its a Steak place. It’s fancy place. Nice place. There is outdoor available as well. beef menu is big and variety. I love wagyu beef the price is per oz and min 2 oz. Side is also very good. Wine menu is huge as well. recommend to try. All the staff are great, well trained and great services.

"Star Crossed lovers introduce their mothers." The fantastic service, attention to detail and the absolutely perfect table at RPM Steak , made our multi...