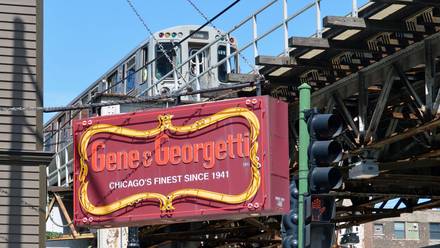 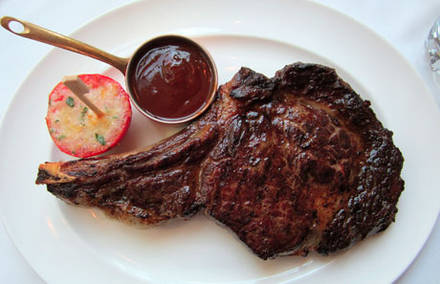 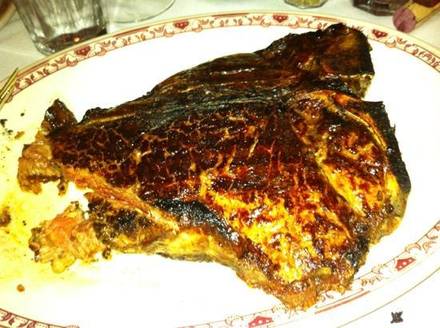 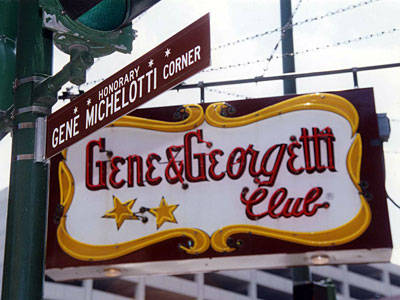 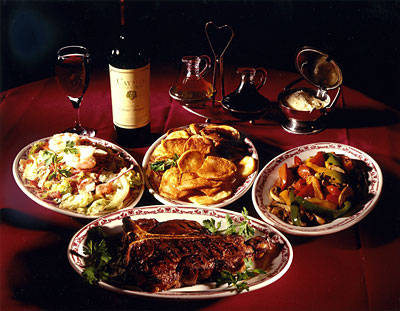 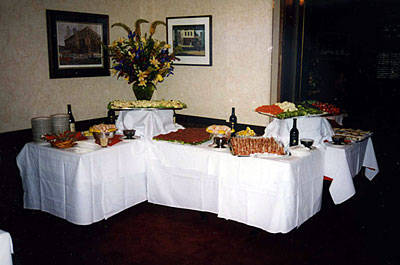 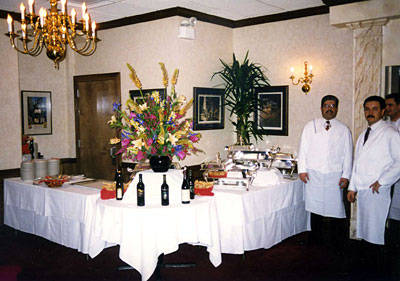 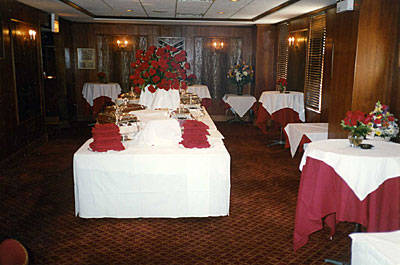 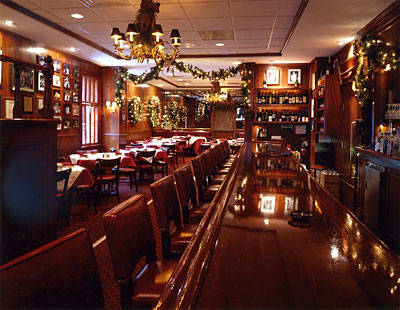 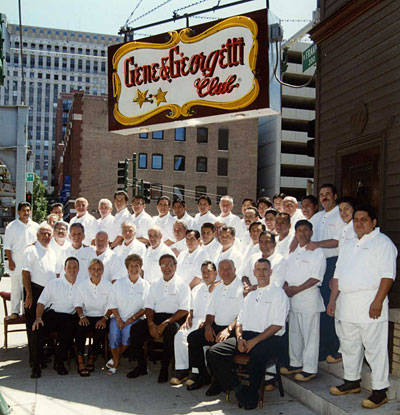 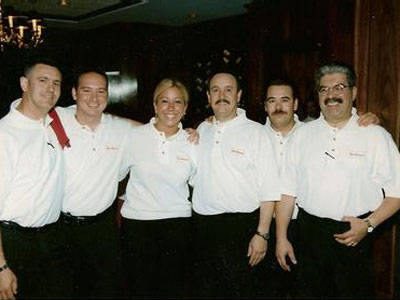 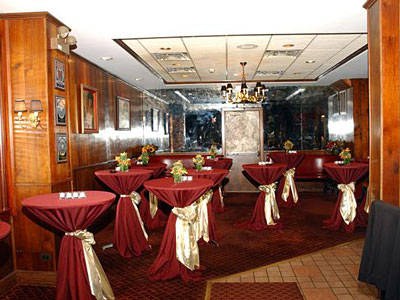 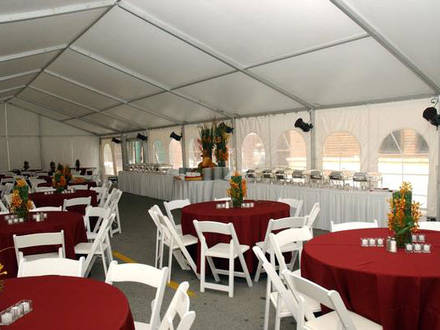 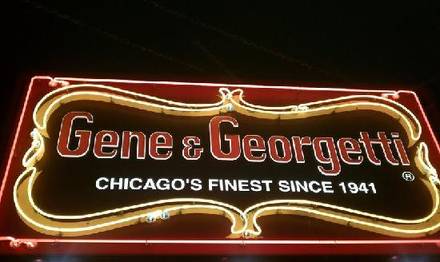 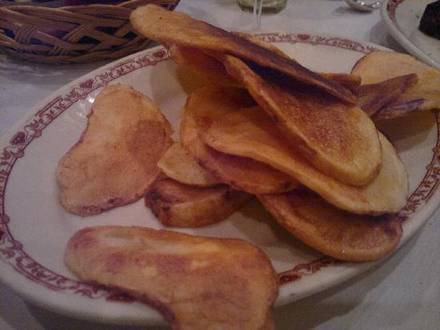 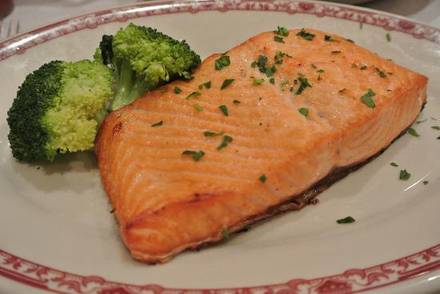 The oldest and one of the very best steakhouses in downtown Chicago, Gene & Georgetti is a classic, legendary place for cocktails and meat. 1941, the same year as the United States entered World War II, Gene & Georgetti opened their doors to serve some of the finest steaks in Chicago.

Gene Michelotti, born in the Tuscan town of Lucca, came to the U.S. when he was 15, started working as a dishwasher and bartender, and met Chef Alfredo “Georgetti” Federighi. They opened Gene & Georgetti, with Gene in the front of the house, Georgetti in the kitchen.

Walking into Gene & Georgetti is like strolling onto a film noir movie set; the crisp white tablecloths, the sunlight streaming into dark, wood-lined rooms, the muffled conversations and the no-nonsense waiters, the inviting bar that only the strong of will can pass without stopping, sitting and ordering a drink. And don’t ask for a chocolo-tini, apple-tini, or any kind of tini except a martini; the bartenders are old school, and though they’d probably accommodate anything you ask for, you really should respect their talent and get a drink that offers them the opportunity to flex their mixologists’ muscles.

Speaking of movie sets, Gene & Georgetti was used in the noir-ish “Road to Perdition,” as well as “Mind of the Married Man,” and the television show “Betrayal.” It’s been mentioned in the “New York Times” and on the Travel Channel, as well as all local channels…it’s that kind of place. Famous.

Gene & Georgetti is also the kind of place that visiting celebrities – Frank Sinatra, Lucille Ball, and Bob Hope among many others – had to visit whenever they came to perform in Chicago. It was the place for great steak and cocktails, and after almost 80 years, it still attracts celebrities like Russell Crowe, Keanu Reeves and Will Ferrell.

Some devoted customers have been coming in for over half a century. What keeps them coming? The undeniable atmosphere is part of it, but the most powerful allure is, of course, the classic menu.

The appetizer list is a catalogue of greatest hits from the Italian-American steakhouse: calamari, clams, bruschetta, and Shrimp De Jonghe, another Chicago classic first introduced even before 1941 at De Jonghe’s restaurant. It’s what Epicurious called “a memorial to a time when we were afraid of garlic but not of butter. The amount of garlic in it was considered outrageously racy.”

Before you get to the steaks, you might consider Chicken Vesuvio, another Chicago original, which originated at Vesuvio’s and is basically a baked chicken with fried potato wedges, carrots and peas. Despite the name, it is not spicy hot. There are also a lot of other Italian and Italian-American specialties like chicken Marsala, chicken Parmesan, veal scaloppini and lasagna. Of course there’s a large range of pastas (which you should have Italian style, after the appetizer – or antipasto – and before the entrée). For pasta, there’s linguini, mostaciolli, tortellini, angel hair…and probably some other kinds of the Italian noodle that the guys in the kitchen might whip up if you ask politely.

But let’s get to the meat, shall we?

There are over a dozen cuts of meat, including filet mignon, rib eye, strip loin, Porterhouse, veal chop and on and on. Is it done right? Ask “Chicago Magazine,” which named Gene & Georgetti as one of Chicago’s top steakhouses, explaining:

“The wood-paneled supper-club vibe intoxicates…the steaks are thick and glorious. Wet-aged for a month and then crusted in a broiler, the beef—whether T-bone, strip loin, or rib eye—packs an incredible punch even without seasoning.”

Atmosphere influences how and what you taste, and there’s something about the time-honored rooms at Gene & Georgetti that makes the meat taste better, more right, even more delicious than you might imagine.

There are also a number of fish selections – Gene & Georgetti has a very fairly extensive menu – many with an Italianate inflection, such as salmon Vesuvio and shrimp Diavolo. Somewhat surprisingly, there’s also a massive list of salads, including Julienne, Caprese, Caesar and other familiar favorites, as well as two sizes of Garbage Salad, massive bowls of greens that may get others in the room wondering if, indeed, you are actually a carnivore…and if not, why in the world did you come to Gene & Georgetti?

Though it banks heavily on tradition, don’t start thinking that the place is going only on reputation. Consider the words of Stephanie Izard, one of Chicago’s most famous chefs, quoted in a “Bloomberg” article about Chicago’s best steak houses:

“I think you can look at Chicago steakhouses in two different ways: traditional or modern.” For traditional, my favorite is Gene & Georgetti’s. It’s the perfect place to sit in a big leather booth with a martini...you’re eating your meal in a historic Chicago dining room.”