On Saturday, October 27, 2018, Morton and Mondavi came together in celebration of Morton’s 40 years in business.  The event, titled “The Taste of Two Legends,” married -- as has been done countless times before -- food from Morton’s kitchen with wine from Mondavi’s vineyard. It was an event not to be missed, but if you missed it, here’s what we ate and drank. Guests were greeted by 40 year General Manager Raki Mehra and Regional Director Nicole Raftery.

The first Morton’s the Steakhouse opened in 1978. Business was not booming. Things did not go well. Then one day, after he gave a concert, Frank Sinatra dropped by, had a porterhouse, and proclaimed it the best steak he’d ever eaten. Next day, lines out the door.

That was the beginning of many openings of what owner Arnie Morton called “a steakhouse for the rich.” And Morton also put his imprint upon more pedestrian food culture in Chicago (he was a founder, with Mayor Jane Byrne, of Taste of Chicago) and even an influence on the Free Love movement (he was an early investor with Hugh Hefner in Playboy magazine).

It’s steak, however, upon which Morton built his empire, and Morton’s now has over 70 national and international locations. To this day, the restaurant continues to serve up some of the most magnificent meat on the planet.

While Morton was serving up sizzling steaks in Chicago, the Mondavi family of Napa Valley was slowly building up the drink that many think is the ideal complement to a juicy steak: red wine, specifically Cabernet Sauvignon, but also many other red meat-friendly wines.

On Saturday, October 27, 2018, Morton and Mondavi came together in celebration of Morton’s 40 years in business.  The event, titled “The Taste of Two Legends,” married -- as has been done countless times before -- food from Morton’s kitchen with wine from Mondavi’s vineyard. It was an event not to be missed, but if you missed it, here’s what we ate and drank.

The seafood course was a salad of buttery lobster, paired perfectly with a 2016 Emblem Chardonnay by Michael Mondavi, not from Napa but rather the Sonoma Coast. Crisp and clean, with notes of grapefruit and green apple, this wine has a slight butteriness that, with light hints of citrus, worked very well with the seafood.

An amuse bouche – butternut squash with crispy prosciutto – came next, and it was served with a special and extremely rare selection: 1977 Charles Krug Cabernet Sauvignon. One year older than Morton’s, this selection was low in tannins, making it a good match for the spoonful of creamy squash, with some notes of tobacco and stone fruit, very relaxed, much like the posse of older guys (including us) who sat around savoring it.

The beef course (there was steak at Morton’s! Surprise!) was a tour de force of beautiful red meat: a mound of medium strips of NY Strip, a ribeye cap (the juicy flavor of ribeye, the tenderness of tenderloin), and a clever deconstructed Beef Wellington, with filet, duxelle mushrooms, pate and puff pastry. This seem to be a table favorite, though the competition was stiff.

The wines, as you may have noticed, were a family effort.

There were maybe 60 people in attendance at Morton’s for this anniversary event, and if you were there (though we realize you probably were not), you would be remembering it as one of the most jaw-droppingly wonderful paired dinners ever, and it was probably only a team like Morton’s and Mondav­­i th­­­at could have pulled it off with such finesse. 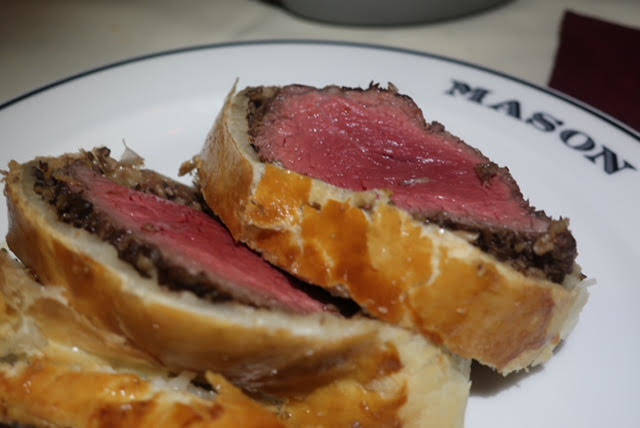 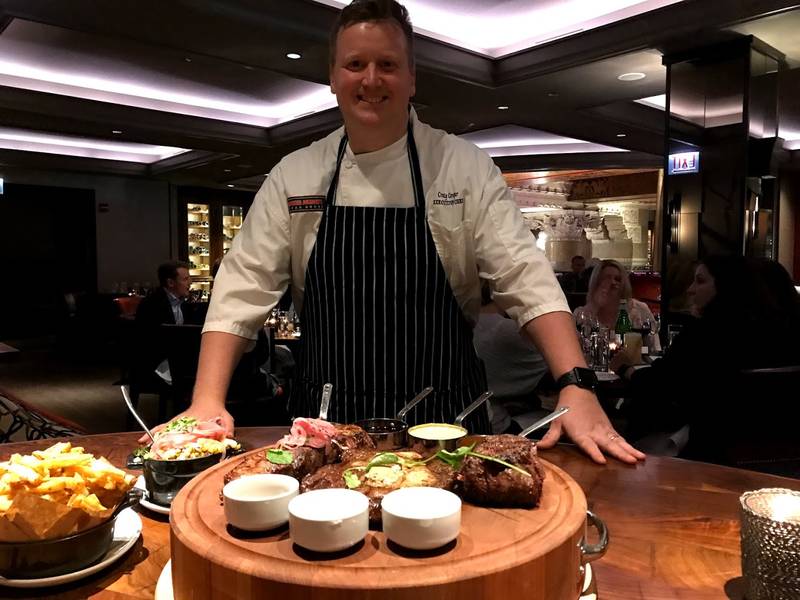