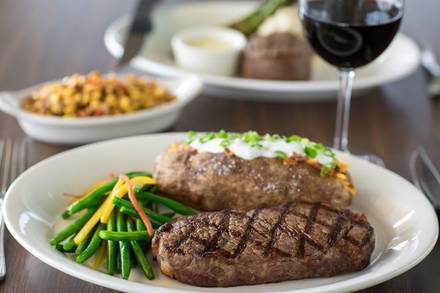 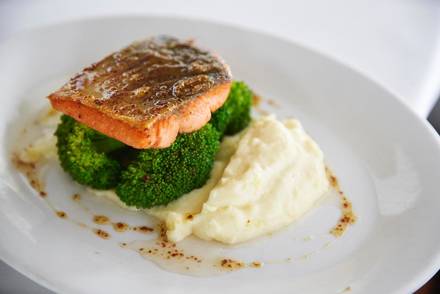 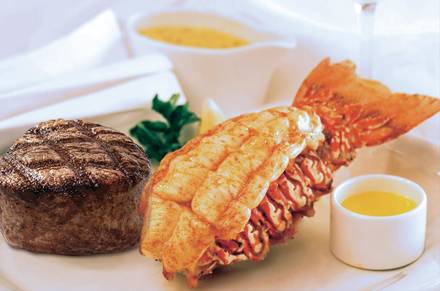 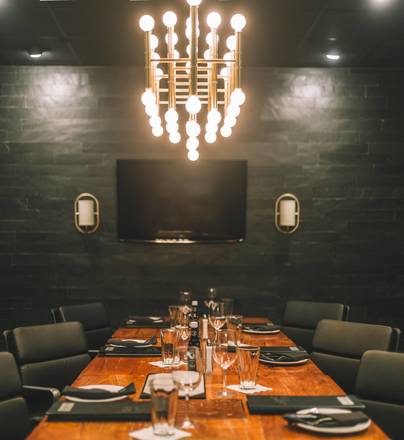 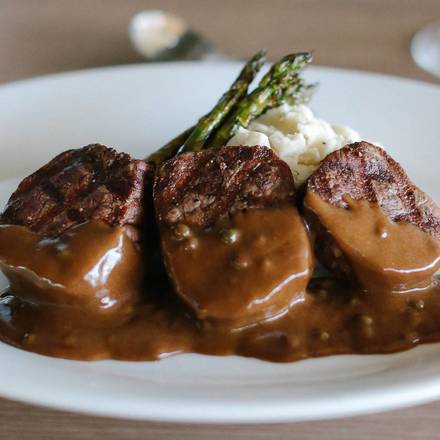 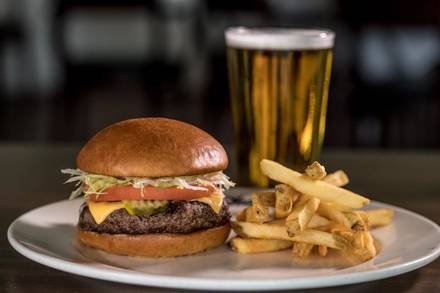 The 347 Grille, boasting four locations in Florida and one in Cleveland, Ohio, is the casual little sister to Shula's Steakhouse. The concept is named in honor of the late NFL coach Don Shula, the "winningest coach in NFL history" who built a restaurant empire before passing away in 2020.

The name of the restaurant pays homage to Shula's achievement of 347 wins during one season. He was also inducted into the NFL Hall of Fame. Decor at 347 Grille is modern, yet offers a classic American steakhouse setting. Two private dining rooms are aptly named The Coach's Corner and The Legends Room.

The casual steakhouse concept plays up all-American favorites: steaks, chops, a signature burger and fish entrees. But first, the starters menu sounds promising and doesn't offer the typical suspects. Diners may go for the likes of BBQ bacon-wrapped shrimp, herb-crusted ravioli and the signature blackened tenderloin tips, which were said to be Coach Shula's favorite.

Great place. Awesome staff. Food is good. A definite place to dine at. We stayed at the hotel and so it was well worth it.

Initial server slow to acknowledge my table. Food was barely warm and entree was extremely salty. For the price, service and food should be better. 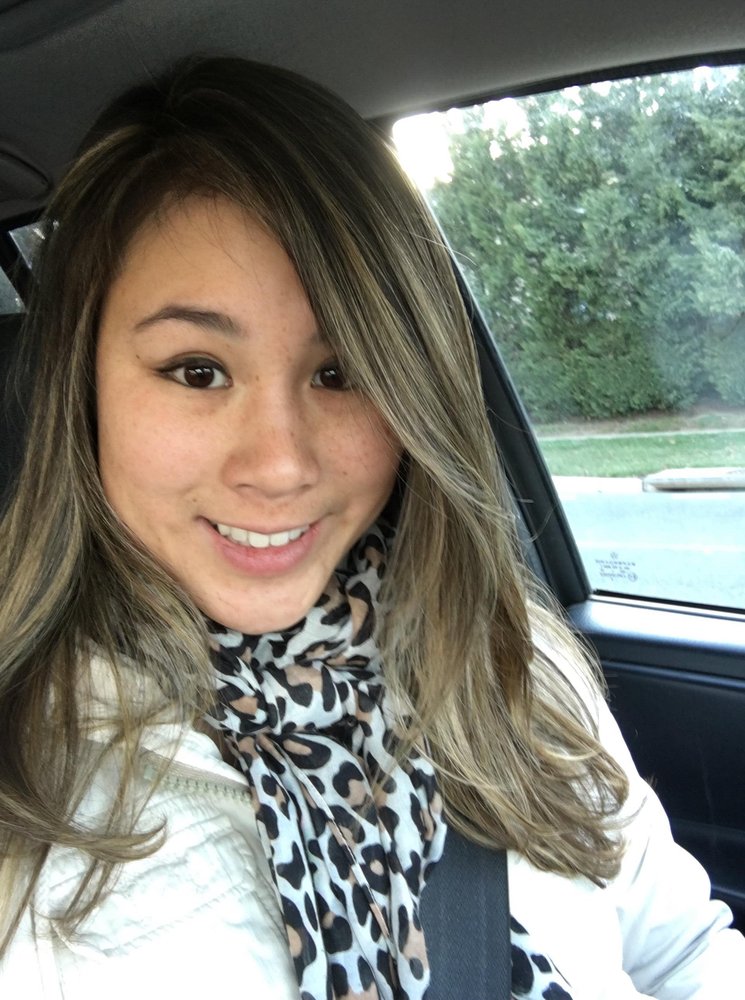 Exceptional service, great upscale yet cozy ambiance, and delicious food. The steak was exactly what I wanted, a simple, high quality steak cooked to...

Fine dining at its best in the heart of downtown Tallahassee, Florida. As soon as you walk in you will realize you are on for a great meal and experience. Our waiter was very knowledgeable and welcoming. The entrées were all cooked to perfection. Every meal came out just like each of us ordered. If you will be visiting or passing through Tallahassee you should add 347 Grille to your agenda.

One of the best Shula's I have been too. Everything was well prepared and the service was professional, but relaxed for a nice evening. Excellent bartender, too. One of the best old fashioned I have had in a while.

Front desk was very nice. Price not worth it. I ordered my food and a waterman martini. Got the food. No drinks. Waitress took over 20 minutes to come and ask how's everything. I said I didn't get my drink buy would like a box to take the rest of the food back to my hotel. Told the waitress no need to bring the drink since I've been waiting for over 20 minutes. She came with my bill and a drink in her hand. She asks "are you staying in our hotel" I said no. She then took the drink back. BTW I'm sitting in the restaurant writing this review. Got my bill and will not return 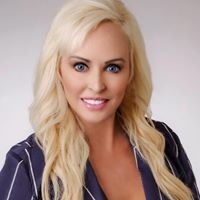 This was a wonderful experience for a fancy family dinner. A few of us split the cowboy steak along with mashed potatoes and broccoli. The meat was...

Had a wonderful 45th anniversary dinner here last night. Pam and I enjoyed some of the best food and service that we have ever had. The server, Greg was a true professional and his manager Branden made sure even the slightest flaw was corrected. The resturant is part of the hotel and late last night they sent up a delicious chocolate cake slice to finish off our evening. What a great touch! Thanks to them the night was GREAT!

I would have given 4 stars if only rating the food but the service was exceptional (Thank you Angel). Drinks were good, but just good. If you order the shrimp appetizer, go ahead and order bread or extra crostini. You're welcome. Ribeye fan? Get the regular, no bone, mid-rare. Save room for dessert if you like bread pudding, just wow.

I spent my birthday night here. The ambiance was very welcoming and charming. I enjoyed every single bite of the meal here. From the starter to the dessert the quality and tastes of everything was outstanding. The cheesecake was number one! Service was delightful and very professional. It was pricey but it’s worth a try.

The bartenders here were sweet and knowledgeable about the menu. They keep the lights dim and it really gives you that fine dining vibe. I would say the crowd it attracts is a bit older so it’s not as fun as the rooftop bar at the hotel. I ordered the fried calamari and it was pretty good. Prices are a little high but it is what you would expect from a hotel restaurant.

This restaurant is outstanding. My waiter, Greg, very personal and knowledgeable about the menu. We started out with the tuna tartare which was great as expected. Both me and my girlfriend got a steak cooked to perfection. I would say the best steak I have had in Tallahassee. A night to be cherish I'm memories.

Wow! From the walk in!!! The hostess, Makayla, was absolutely lovely. I chose to sit at a bar table, but it was the best decision I made. Shota, is phenomenal. So personable, attentive, timely. I highly recommend this restaurant for a date, a solo outing, a business meeting,etc. The environment is highly sophisticated which matches the menu and the food that is brought out to you The service matches the aura of this hotel. Thank you for such a pleasant 1st stay in Tallahassee. 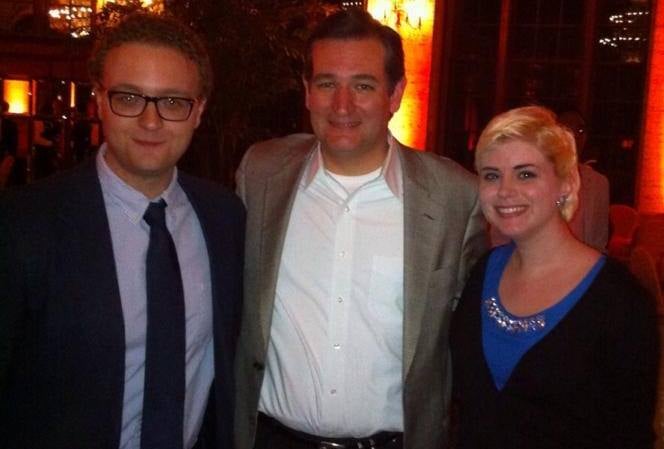 First let me say we are huge Shula's fans and regulars at the Orlando location. This location didn't quite live up to the hype. The prices didn't make any...