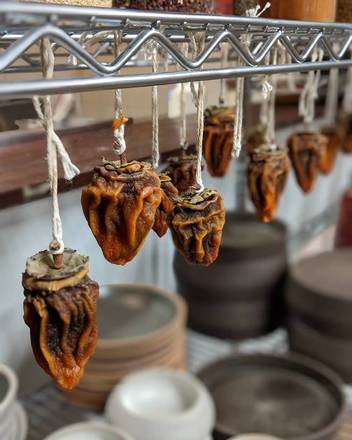 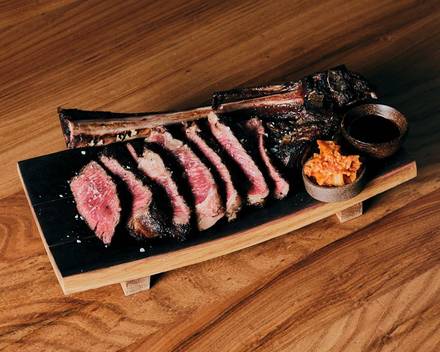 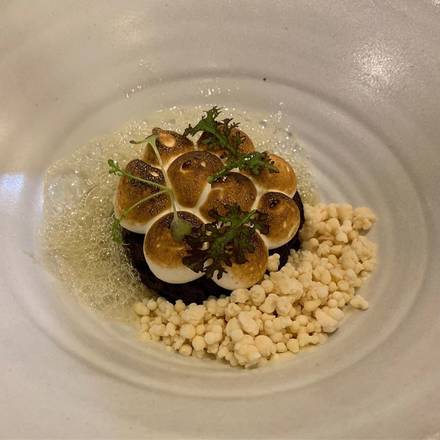 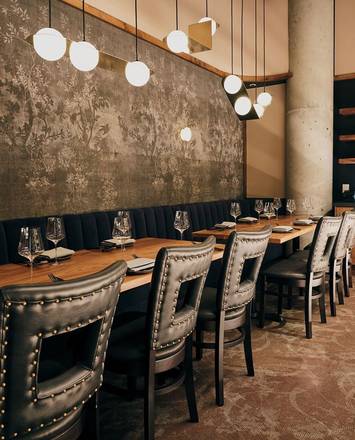 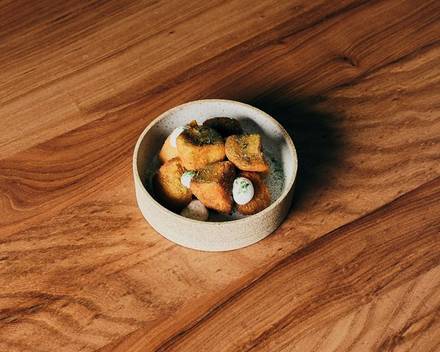 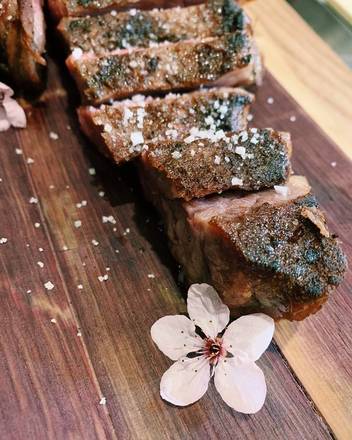 Situated in the Design District of San Francisco, Niku is a creation of a Michelin-starred duo. Owners Kash Feng and Jackson Yu (Omakase Restaurant Group) are also behind nearby Dumpling Time and the Michelin-starred Omakase.

In addition to Niku's unique menu there is an in-house butcher program that's overseen by meat master Guy Crims. He's also over The Butcher Shop.

The steakhouse offers more than 100 California wines–all available by the glass–and a full bar with a focus on whiskey.

FATHER’S DAY IN SAN FRANCISCO IS ALL ABOUT OUTSTANDING STEAK

Highly recommended and one of the best steaks I’ve ever had. Chic ambience, refined cocktails, attentive service. The rib eye cap was perfectly seasoned and almost melted in the mouth. Of the A5s, the Kumamoto, which was the cheapest, was clearly our favorite and a must have. The bone marrow starter was very very good. The tomato side was interesting and tasty but I would avoid. Attire smart casual or smart. Great for a special occasion or a date (not a first). Pro tip: sit on the chef’s counter.

My favorite steak house in SF! It’s a Michelin-starred restaurant, but it’s not too formal. It is well-balanced between formal and friendly vibe. Every dish is good and not that pricey. Among the dishes I ordered, I think everyone has to try ‘bone marrow’

Disappointing. Food was fine, the quality of the food justified the price. Service however was incredibly disappointing, I had to prompt the server for every interaction (water, order next course, etc). Responses were just "ok," with no conversation, recommendations, etc. The steak knife I received was dull enough that I could literally rub it across my palm and not make a mark. I was also told to eat my steak quickly because it would get cold due to them keeping the A/C cranked. (Seriously, bring long sleeves or a jacket, it was uncomfortably cold.) I happened to dine solo, but if I was bringing a +1 for a special occasion, the service would have absolutely ruined the evening.

food was amazing - from appetizers to desert. Steak was cooked to perfection. Service was great too. Staff was fast, efficient, welcoming, and attentive. all in, a flawless experience that warrants the price level and Michelin rating.

Stopped by here for a drink and dessert. The place was "happening". Great vibes. Great people. And a unique open kitchen where you see the steak being flamed in front of you. We had a wagyu fat brownie with miso ice-cream and it was probably the best dessert we've had in a while. This was even after arriving a full meal at another place. We will absolutely return to Niku for a proper meal.

I dont think it can get any better. One of the places where you go and everything is amazing. Food, service, atmosphere. This place is A MUST!~

Top notch Japanese steakhouse experience: the ingredients, preparation, and presentation are all 5/5. Only miss so far is the service, we've visited a few times and each time had to remind waiters, or wait for far too long for some of the food. The tomahawk is a must try and perfect for sharing. The meatball and fried crab were excellent too. Of course, you won't go wrong with the wagyu tasting menu.

Incredible experience. The cuisine was exquisite. The wagu is only comparable to their service; exquisite and non compromising. Nick, Daniel and the wait staff are incredible. I could ask for no better service.

I'm not even sure where to begin. This was one of the best dining experiences I've had and I loved every second of it! This was recommended by a friend, while I was in town for a conference. I managed to snag a reservation at the Chef's table and went by myself. I was seated quickly and my server, Eric, was extremely friendly and helpful with his suggestions. He deserves a huge shoutout! I ordered an espresso martini, the bone marrow, crispy potatoes, and the tomahawk. It was so fun to sit at the Chef's table and watch them prepare all the delicious, sizzling meats. One of the chefs also offered other great restaurant recommendations in the area for me to try and he was so nice! Espresso martini — Loved it! Not too sweet. Bone marrow — Holy moly. This was just heavenly. I only ate one slice of the bread since I was trying to save room for everything else I ordered. However, the bone marrow and A5 wagyu were the most perfect blend of savory richness. Crispy potatoes — I loved these so much. So crispy and soft at the same time. I also really enjoyed the miso dipping sauce! Tomahawk — Talk about a perfectly cooked, mouthwatering steak!! I ordered this medium rare (of course) and I was even presented with a tray of beautiful knives and got to choose my own to use! I cannot say enough nice things about this entire experience and the food. Service was so attentive and I felt truly welcomed by each person I interacted with. I can't wait to come back to visit and try the rest of the menu!

Came here for the wagyu, which was great! we're happy with all the side dishes ordered, especially the crispy pig ear. Other than the food, everything else is just ordinary...which I was not too disappointed since the food was great, was expecting better service though

I’ve been here many times. For me its the top in terms of Japanese steakhouse in SF. The main attraction is the A5, today they had a special tasting menu of 3 types each 4oz for total of $440. It’s expensive but worth it, can easily feed 2 people but 3 would be fine, its so rich. I’d supplement with Asparagus, Pees and Mushrooms. If you have room the potatoes and parker rolls are die for, but this time just me and my daughter we skipped

Probably the best steak I’ve ever had. We got the A5 sampler and it blew me away - incredible flavor and juicy beyond belief. Sides were amazing as well. Personal favorites were the potatoes, pig ears, and beef tartare.

Food is great. But the server that serve us is terrible. First time here and he didn’t even introduce the menu to us and just seem like very high on something. Just tell us the special and left us to figure out the menu ourself Beside the server everything is great but for the price the server need to be more professional

was this place real or just my dream? I’m not a huge fan of steak houses but omg did this blew my mind? We had one of the course menus, I’m out of words to describe how good everything was. My personal favorites that you shouldn’t miss if you go to Niku: Caviar and potatoes Kobe Brownie The potatoes Aged rib-eye Fried pork ears Tomahawk Everything, really. Also it’s perfectly paired with the amazing drinks, wine selection and excellent service. This place is a must. Best steakhouse I’ve ever been to.

For the money we spent ($1500 for a party of 5, and we even brought our own wine which probably saved us about $400) I was expecting to be a mind-blowing experience, but wasn't even memorable. We made a reservation several weeks in advance, showed up on time but were only seated after waiting for 35min. They couldn't even accommodate us at the bar while waiting, and they didn't even offer any complementary drinks or snacks. Bad start. The floor service is good but the kitchen is awfully slow. I believe it's on purpose to push you to buy more drinks while waiting. We pretty much ordered every item in the menu and the only remarkable ones were the A5 tasting ($265 per serving) and the pig ears. I believe their main problem is the menu itself. Almost every plate contains beef fat, so everything is extremely heavy and ends up being unpleasant. I think eating meat is enjoyed better when side dishes are light and fresh, to compensate. Hopefully, they'll consider same menu additions in the future.