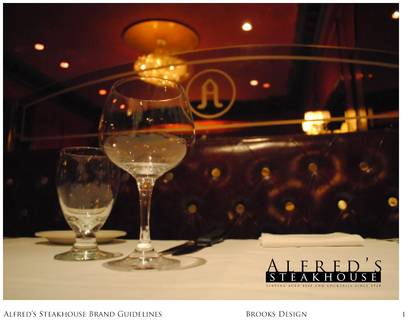 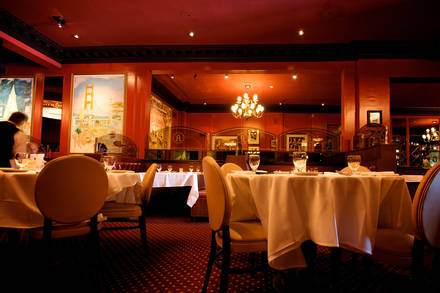 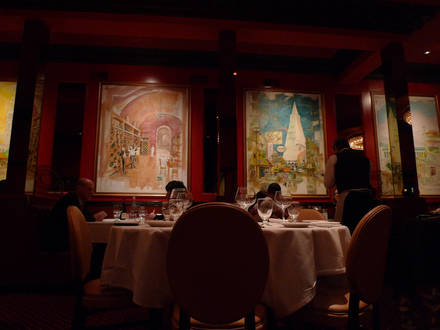 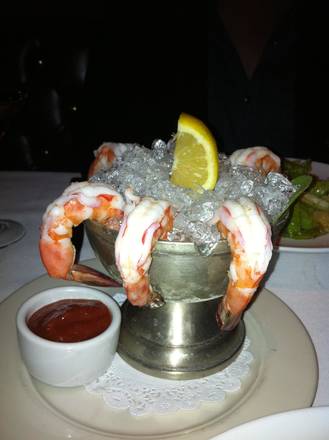 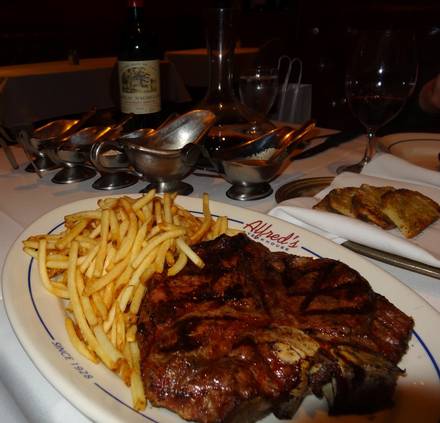 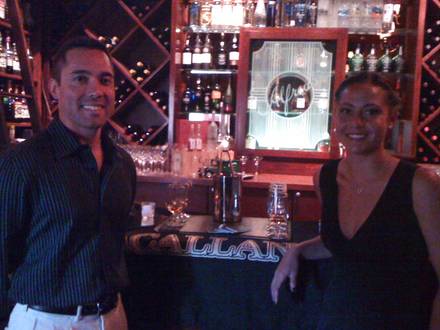 Alfred's Steakhouse--considered San Francisco's oldest steakhouse--has been around since 1928. That means it survived Prohibition, the Great Depression, World War II and a host of other major moments in U.S. history.

It moved from its second location of 886 Broadway in 1997 (It was previously on Vallejo Street), and brought all the original fixtures with it: the original booths, the original bar top and even the “Closed for Prohibition” sign--which hangs defiantly in the bar. The owners have also held steadfast to the classic steakhouse menu, specializing in corn-fed, dry-aged beef cooked over Mexican mesquite charcoal.

Alfred's serves lunch only on Thursdays, and it's a chance for fans to dig into generous portions of lobster and shrimp cobb salad, steak cobb salad, and chicken fried steak. Happy Hour occurs Monday through Friday with food and drink specials.

the restaurant was closed permanently the consulate of Guatemala opened its doors at this address..

Alfred's is back. We loved it. Amazing service and wonderful staff. Food was excellent. So glad to see them back to the way it used to be. Can't wait for our next visit.

Absolutely pathetic experience. We had a large party and almost everyone in the group hated their food. It took a long time for it to come out and the server pretty much messed it all up.

FABulous! : ) We had a huge group (35+) and booked the private dining area on the bottom floor. The service was superb, the food was delicious, the wine was wonderful, and the ambiance was perfect. The group all loved it. Nice bar upstairs as well! I would highly recommend Alfred's Steakhouse for any event, friend/family dinner, or intimate night out. Thanks so much to the Alfred's team for taking such great care of us and providing an exceptional experience for our guests.

one of the best spots of its kind in the area. i had a brother come into town and asked me to take him back here. it has a good interior. atmosphere is like a restaurant in fort worth i loved.

The flavor of the steak is great. The price for the entire meal, which includes two sides almost seemed low for the amount of food I received. I had the Chicago ribeye. The marbling was perfect and there weren't huge globs of fat. The only improvement would be on the shared starter, which was cheese, olives, etc. The quality wasn't that great and I could have done without it.

Went to Alfred's with my husband for a dining experience and was disappointed. The decor is fabulous and sets the stage for a great meal. We ordered our steak medium rare and it came well done, chewy and full of gristle. We also had to ask for a steak knives. Then, the server added an 18% gratuity to our bill. We asked and she said it was automatic there. What?!?! There was just two of us so I'm not sure why it is automatic. Ugh, I had such high hopes.

Had high hopes, but this was a bummer of an experience. Such a bummer, in fact, that I felt compelled to write a review. Our service was beyond spotty - our server would disappear for long stretches of time, and we constantly had to ask busboys for her to come over. The appetizer plate resembled something I could put together at home. My dirty martini was just muddled pimento olives at the bottom of the shaker. The salad was okay, but my steak had no seasoning or flavor, and neither did the creamed spinach (a complaint repeated by my dining companions as well). One of my dining companions was given another table's order. We also had to request steak knives and non-salad forks. For the cost of the meal, it was incredibly disappointing. SF could use a great old steakhouse, but I'm afraid this isn't it. A chain restaurant like Ruth's Chris or Morton's would produce a more satisfying meal, for sure.

Hands down the best restaurant in San Francisco: fantastic hospitality, delicious food, and fabulous location. You can never go wrong with this place. If you are looking for a perfect place to celebrate your birthday or have a romantic dinner Mastros won't disappoint you.